When I heard this song for the first time I liked it…the line “If dreams are like movies, then memories are films about ghosts” got my attention. It is a well-written song with great imagery. 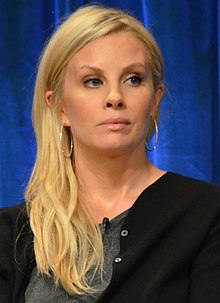 This song deals with memories and hope (both the false ones and all the far-searching dreams). Mrs. Potter is a movie star who Adam Duritz is looking up at, admiring, and wanting her to be a part of his life. This song has a very dreamy feel about it all the way through, as does the video clip. Duritz says he wrote the song after going to a movie and wondering what it would be like to fall in love with a girl on the screen.

Duritz had some particular insights here, as he has dated a litany of actresses, including Mary Louise Parker, Jennifer Aniston, Samantha Mathis and Emmy Rossum.

It was written about Monica Potter from the movies Con Air, Patch Adams and Saw. He says that after he wrote the song, he had dinner with a couple who brought an actress friend along. She and Duritz hit it off, and he invited her to the recording session, where he announced her as “Mrs. Potter.” She went out of town for a few days, during which time Duritz wrote a few songs inspired by their quick separation and long phone calls: “Colorblind,” “Four Days” and “Kid Things.”

When she returned, they started dating. Their producer Dennis Herring had given her a tape from the sessions, which she played for Duritz when he told her that they were having trouble mixing the song. One take on the tape sounded really good, so Adam played that one for the band and used it on the recording. They realized that they had overcomplicated the song, so they stripped it down, working from that one take.

This song runs 7:46, but Adam Duritz tells us that it took him only about 8 hours to write. “It’s a longer song, but it’s one sitting,” he said. “I would always sit in that feeling for a while.”

Well I woke up in mid-afternoon cause that’s when it all hurts the most
I dream I never know anyone at the party and I’m always the host
If dreams are like movies, then memories are films about ghosts
You can never escape, you can only move south down the coast

Well, I am an idiot walking a tightrope of fortune and fame
I am an acrobat swinging trapezes through circles of flame
If you’ve never stared off in the distance, then your life is a shame
And though I’ll never forget your face,
sometimes I can’t remember my name

Well, there’s a piece of Maria in every song that I sing
And the price of a memory is the memory of the sorrow it brings
And there is always one last light to turn out and one last bell to ring
And the last one out of the circus has to lock up everything

All the blue light reflections that color my mind when I sleep
And the lovesick rejections that accompany the company I keep
All the razor perceptions that cut just a little too deep
Hey I can bleed as well as anyone, but I need someone to help me sleep

So I throw my hand into the air and it swims in the beams
It’s just a brief interruption of the swirling dust sparkle jet stream
Well, I know I don’t know you and you’re probably not what you seem
But I’d sure like to find out
So why don’t you climb down off that movie screen

When the last king of Hollywood shatters his glass on the floor
and orders another
Well, I wonder what he did that for
That’s when I know that I have to get out cause I have been there before
So I gave up my seat at the bar and I head for the door