A fun song with a sense of humor. It stays with me on one listen. Apparently, it stayed with others because it peaked at #1 in the Billboard 100 in 1961. Unfortunately, this was Ernie’s only top 40 hit.

This song was written by Allen Toussaint, who was Ernie K-Doe’s producer. Toussaint came up with the song when he was playing piano in his family’s living room, messing around with bits of a song he had heard from the gospel group the Harmonizing Four. Trying to think up lyrics, he came up with the title and quickly fabricated the story about a guy who is put through hell by his mother-in-law.

After researching this song…I found a picture of Ernie and Led Zeppelin in New Orleans. 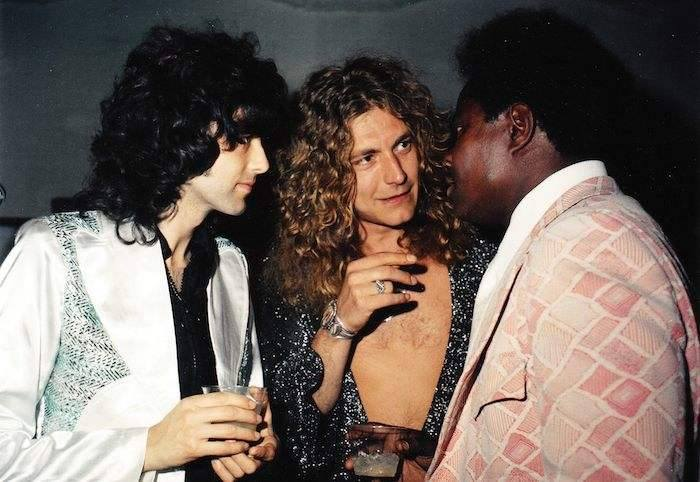 K-Doe’s real name: Ernest Kador. Born in 1936, he remained a popular singer and radio personality in New Orleans until his death in 2001. While best known as a singer, K-Doe was also an accomplished drummer.

The song plays on the stereotype of the meddling mother-in-law who feels the man who married her daughter isn’t good enough for her. Most songs of this nature would be labeled “novelty” records, but K-Doe’s sincere delivery kept that tag off the song in most publications.

Toussaint didn’t have a mother-in-law at the time – he was single – but he kept hearing comedians making mother-in-law jokes on TV, so he knew it would get a reaction. Toussaint says that his grandmother was horrified when she heard it, but forgave him later.

The bass singer on this track who repeats the “mother-in-law” refrain was Benny Spellman. The success of this song caused a running argument between K-Doe and bass singer Spellman as to who was responsible for the hit. Spellman prevailed upon Toussaint to write a song for him to record, “Lipstick Traces (on a Cigarette).” When Spellman recorded it, K-Doe sang backup vocals.

Allen Toussaint thought Ernie K-Doe would be a good fit for this song, since Ernie was known as a showman, and for making outrageous self-promotional statements. K-Doe claimed that this song “will last to the end of the Earth, because someone is always going to get married.”

In 1994, K-Doe opened a bar and music venue in New Orleans called “The Mother-in-Law Lounge” with his wife Antionette. After Ernie died in 2001, Antionette kept the venue alive, preserving Ernie’s memory with a fully costumed, look-alike mannequin of the singer. The lounge was completely destroyed by Hurricane Katrina in 2005, but reopened a year later. Antionette K-Doe died of a heart attack on February 24, 2009, which was the day of Mardi Gras.

K-Doe claimed that he fished the song out of Allen Toussaint’s trash can and recorded it because he related strongly to its sentiments: his mother-in-law was living in his house at a time of marital turmoil. In our interview with Toussaint, he explained what happened: “I wrote four songs for him to do, because we always recorded four songs at a time, and ‘Mother-In-Law’ was one of them. When I tried it out on him the first time, he began to shout and preach at it and I really didn’t like his approach to it. I thought it was a waste of time to try to get him to do it, so I balled it up and put it in the trash can, like I did with other songs. One of the backup singers, Willie Harper, thought it was just a wonderful song, so he took it out of the trash can and said, ‘K-Doe, why don’t you calm down and listen closer to the way Allen is doing it and try to do it like that? This is a good song.’ So he calmed down and didn’t preach at it, but did it like it finally came out.”

This song was recorded in New Orleans at J&M Studios, which was also where Little Richard and Fats Domino recorded. Allen Toussaint was a regular at the studio, sometimes recording his own material, but usually doing session work.