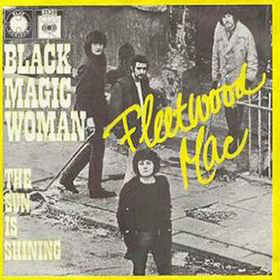 Most people today know the Lindsey Buckingham and Stevie Nicks Fleetwood Mac but the band has a long winding history. The band members at this time in 1968 were Peter Green – Guitar, Mick Fleetwood – Drums, John McVie – Bass, Jeremy Spencer – Guitar and Piano, and Danny Kirwan on guitar. Christine Perfect contributed keyboards from the second album on and then married John McVie and joined in 1970.

Peter Green is a great guitar player, good singer and a very good songwriter. The Peter Green era produced songs such as Oh Well, Albatross, and The Green Manalishi (With the Two Prong Crown).

This was a hit for Santana, and their version was a cover of this Fleetwood Mac song that hit #37 on the UK charts. Peter Green, who was a founding member of Fleetwood Mac, wrote the lyrics. The original’s music sounds very similar to the sound Santana added on his version. Mick Fleetwood once described this as “three minutes of sustain reverb guitar with two exquisite solos from Peter.”