I watched a few episodes this weekend. The show has a local connection for me because of Frank Sutton.

Gomer was a naive country boy from Mayberry North Carolina who joined the Marines and Andy went with him for the induction and helped the clueless Gomer get accepted. Frank Sutton played quick tempered Sgt Carter who would be tormented by Gomer Pyle for five seasons. I would watch the show as a kid and I thought Sgt Carter was mean to Gomer…as an adult I could understand if Carter would have choked him.

The show was a major hit. It never placed lower than 10 in the Neilson ratings. In 1969 Jim Nabors wanted out because he wanted to do a variety show. No one could understand why he wanted out of a hit show but he wanted to be in a program where he could sing, dance, and do different bits.

CBS offered Nabors a variety show so he was happy. They also offered Frank Sutton his own show Sergeant Carter–USMC. It would employ a black recruit who, unlike Gomer, would always be one step ahead of the Sergeant. It could have been a big hit but he turned it down because he felt like he did everything he could do with the character.

Sutton ended up co-starring with Nabors on his variety show and Sutton worked well in the comedy bits but was not a dancer or singer. CBS told Nabors he had to fire Sutton but Nabors refused and the show was canceled.

The local connection with Sutton is he was born in Clarksville Tennessee, a few miles from where I live. Sutton appeared in movies and shows from the 50s thru the 70s. The Twilight Zone, Have Gun Will Travel, Gunsmoke, Route 66 and many more.

He took acting in East Nashville High School and graduated in 1941.

After high school, Sutton returned to Clarksville to become a radio announcer. He enlisted in the U.S. Army during World War II and served in the South Pacific, taking part in 14 assault landings. Sutton was a sergeant who served from 1943–1946 in the 293rd Joint Assault Signal Company. He was awarded the Bronze Star and Purple Heart; he had been medically rejected by the Marine Corps. 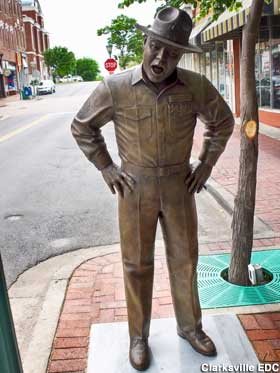 This is an interview with Frank Sutton that was never published around the time of the variety show.