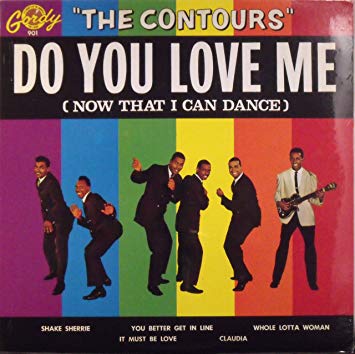 The first time I heard this song was the Dave Clark Five’s version. It was written by Motown president Berry Gordy Jr, who wrote it for The Temptations, but they failed to arrive for the recording session. At the same time but in a different Motown studio, The Contours arrived to record “It Must Be Love,” but Gordy had other ideas – he asked them to cut “Do You Love Me” instead. The song became one of Motown’s first hits.

Joe Billingslea of The Contours told Mojo magazine February 2009 the story of this song: “We had just left the record hop and we turned at the studio. The doors were always open in those days. Berry was down there at the piano and he said ‘I want you to try this song I’m writing.’ He told us how he wanted the backgrounds to go and we sang it. ‘Try it again, I didn’t quite like it,’ he said. After about the third time he said, ‘That’s not right. I think I’ll give it to The Temptations instead.’ I told him not to. We did it again and he said, ‘That’s exactly how I want it. Come in tomorrow morning, we’re going to record it.’ So we did.

I didn’t like the song. It reminded me of ‘Twist And Shout.’ I said: ‘This song ain’t gonna do nothin’, man.’ That same week it was released and the following week it made the charts. I turned around and said: I love that song! Did I change my opinion? Of course! We realized later that The Temptations could never have sung that song because it wasn’t suited to them but Berry had motivated us to sing it the way he wanted it.”

This song peaked in popularity just as Motown launched their first “Motortown Revue” tour to showcase their acts. The Countours were stars of the show, igniting crowds with “Do You Love Me.” Lower on the bill were some other Motown acts that had yet to hit, including Marvin Gaye, Little Stevie Wonder, and The Supremes.

After being featured in the 1988 movie Dirty Dancing, this was re-released 26 years after it was originally recorded. This time, it charted at #11. The song was a good fit for Dirty Dancing, which despite featuring some modern, original songs, was set in 1963. This was a great song of that era for a dance scene.

The Dave Clark Five recorded this in 1964 as the British Invasion was underway. Their rendition hit #11 in the US. On March 8, 1964, The DC5 played it on the first of their 12 appearances on The Ed Sullivan Show.

In his autobiography To Be Loved, recalls a confrontation with Motown’s primary bass player, James Jamerson, over this song. Jamerson, who is lauded as a creator of the Motown sound, was playing a jazz beat during the session despite Berry’s instructions. “You’ve got to stay on the f–kin’ downbeat,” Berry told him, hoping he wouldn’t have to kick his star bassist out of the session. When they rolled for the next take, Jamerson did as instructed, playing the Pop groove Gordy requested… until Berry took his eyes off him. “In that split second, Jamerson hit four or five Jazz upbeats in rapid succession,” Gordy recalled. “I turned to let him have it, but before I could say anything he had jumped back on the downbeat so brilliantly I could only smile.”

In 1963, London group Brian Poole And The Tremeloes recorded a version that topped the charts in 16 countries including the UK.

This song featured in a 2016 Pepsi commercial starring Janelle Monáe. In the spot, which debuted during the Super Bowl, Monáe dances to the song before entering another room where she goes through a time warp and joins in the celebration to Madonna’s “Express Yourself.”

Do You Love Me

You broke my heart ’cause I couldn’t dance,
You didn’t even want me around
And now I’m back to let you know I can really shake ’em down