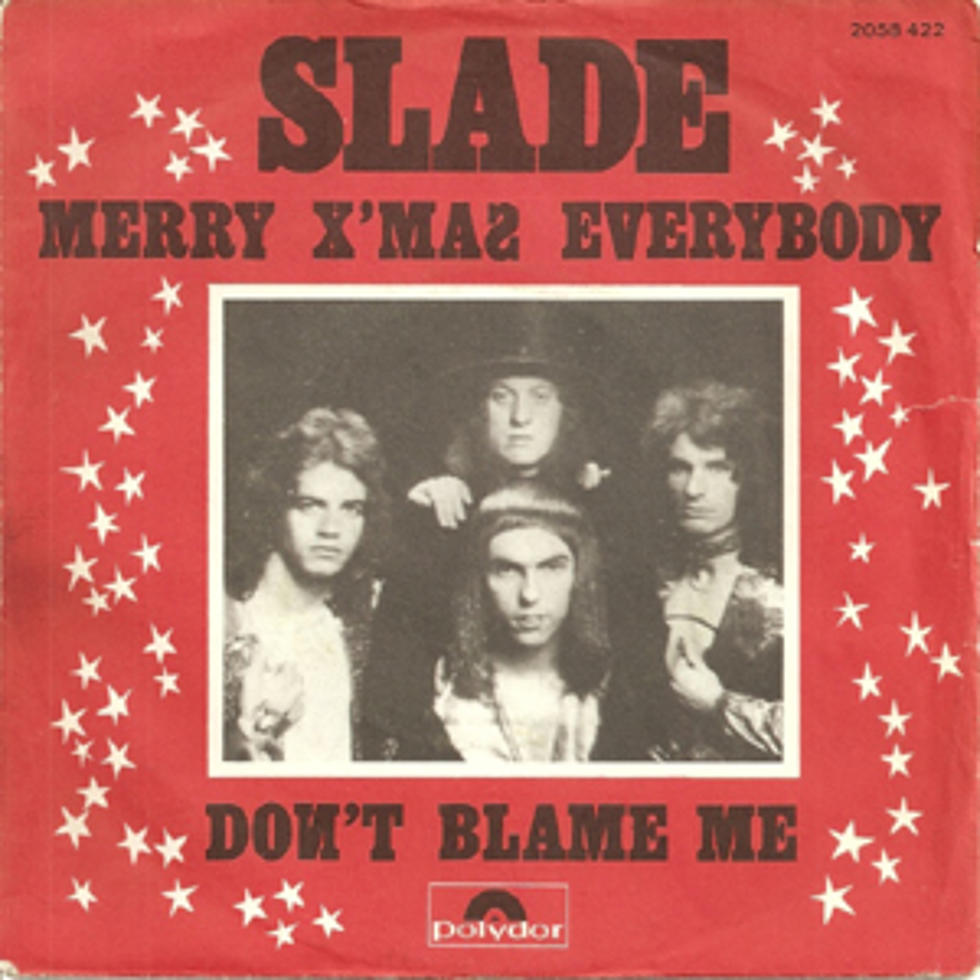 This is a great Christmas song that was released in 1973 and ever since it re-enters the charts every December in the UK. The song never hit in America but it went to #1 in the UK Charts. I first heard it on a Doctor Who episode in the mid-2000s and have liked it ever since.

This was based on a psychedelic song, “My Rocking Chair,” which Noddy Holder wrote in 1967. In 1973 the Slade vocalist decided to convert it into a Christmas song after a night out drinking at a local pub. He and the band’s bass player and co-writer Jimmy Lea camped out at Noddy’s mother’s house and got down to changing the lyrics to make them more Christmassy. Jimmy Lea incorporated into the verse parts of another song which he was then writing and Noddy re-wrote the words incorporating different aspects of the Christmas holiday season as they came to mind.

When Noddy Holder wrote the line “Look to the future now, it’s only just begun,” he had in mind the strikes that were blighting Britain at the time. He told the Daily Mail On Sunday November 10, 2007: “We’d decided to write a Christmas song and I wanted to make it reflect a British family Christmas. Economically, the country was up the creek. The miners had been on strike, along with the gravediggers, the bakers and almost everybody else. I think people wanted something to cheer them up – and so did I. That’s why I came up with the line.”

The harmonium used on this is the same one that John Lennon used on his Mind Games album, which was being recorded at the studio next door.

This was recorded at the Record Plant studios in New York while the band were on a tour of the States in the summer of 1973. When they recorded the vocals, they sang the chorus on the stairs in order to achieve the echo that they required. Guitarist Jimmy Lea recalled to Uncut magazine in 2012: “All these Americans were walking past in their suits thinking we were off our rockers singing about Christmas in the summer.”

Producer Chas Chandler opened the song with a howl recorded during some of Noddy Holder’s vocal exercises.

In the UK this has become a standard, and it is usually reissued in its original form each Christmas. On several occasions, the song has re-entered the Top 40.

A few months before Slade recorded this song, drummer Don Powell was badly injured in a car crash. Though his physical recovery was quick, the mental scars took longer to heal. Noddy Holder explained to The Daily Mail December 18, 2009: “The doctors told us to get him playing drums again as soon as possible to boost his confidence. But he was suffering from short-term memory loss – he could remember our old songs, but not the new ones. So, instead of recording live, we built up Merry Xmas Everybody layer by layer. That gave it a more poignant, restrained sound. It was something new for us. But the fates were with us and it became our biggest hit.”

Noddy Holder explained to Q magazine January 2013 how the song was originally inspired by The Beatles: “I wrote the original verse with the lyrics, ‘Buy me a rocking chair, I’ll watch the world go by. Bring me a mirror, I’ll look you in the eye,’ in 1967 in the aftermath of The Beatles’ Sgt Pepper,” he said. I was being psychedelic. Dave (Hill) wrote another part to the song but it didn’t work so we put it away. Then in 1973 he remembered my verse one day when we were trying to write a Christmas single. We changed the words to, ‘Are you hanging up your stocking on the wall?’ and the rest fell into place.”

UK copyright collection society and performance rights organization PRS For Music estimated in 2009 that 42 percent of the earth’s population has heard this tune.

Noddy Holder’s earliest childhood memory served as inspiration for one of the song’s lines. He recalled to the Mail On Sunday’s Live magazine: “As a lad we used to knock sleds with old orange boxes and go tobogganing down this big old quarry in the snow at Christmas. It was the inspiration for the line ‘are you hoping that the snow will start to fall.'”

I want that hat he starts off with… in this video…very subtle.

Are you hanging up a stocking on your wall?
It’s the time that every Santa has a ball
Does he ride a red nosed reindeer?
Does a ‘ton up’ on his sleigh
Do the fairies keep him sober for a day?

Are you waiting for the family to arrive?
Are you sure you got the room to spare inside?
Does your granny always tell ya that the old are the best?
Then she’s up and rock ‘n’ rollin’ with the rest

What will your daddy do
When he sees your Mama kissin’ Santa Claus?
Ah ah

Are you hanging up a stocking on your wall?
Are you hoping that the snow will start to fall?
Do you ride on down the hillside in a buggy you have made?
When you land upon your head then you’ve been slayed

21 thoughts on “Slade – Merry Christmas Everybody”