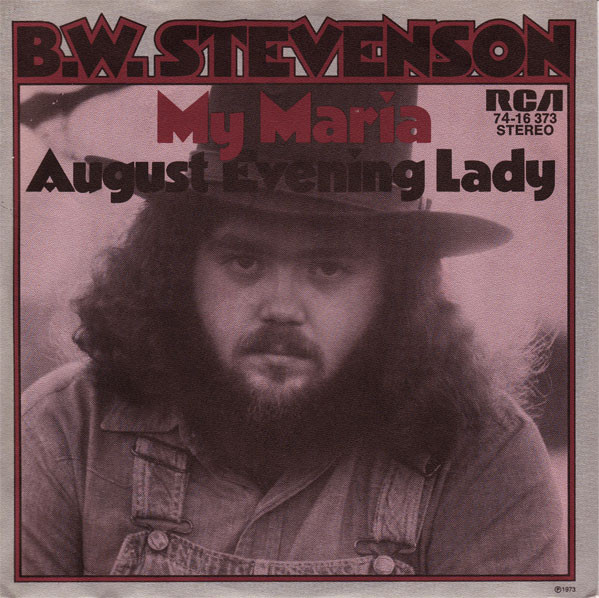 It’s a catchy song with a country slant that was a big hit in 1973. The song was written by Stevenson and Daniel Moore. Daniel Moore wrote the song “Shambala” that Stevenson recorded but it wasn’t a hit until Three Dog Night covered it. This song peaked at #9 in the Billboard 100 and #7 in Canada.

The country duo Brooks and Dunn took the My Maria to #1 in the Country Charts in 1996.

In February 1973, Stevenson released the song “Shambala,” which was written by the composer Daniel Moore. Two weeks later, Three Dog Night released their version of the song, which became the much bigger hit, charting at US #3 while Stevenson’s version stalled at #66. Stevenson and Moore then got together and re-wrote “Shambala” as “My Maria,” changing the lyrics so the song became an ode to a beautiful woman. The ploy worked, and Stevenson had by far his biggest hit – his next closest chart entry was “The River Of Love” at #53, also written by Moore.

“Shambala” was often credited as being written by Stevenson. Moore told us: “My co-writer on ‘My Maria,’ B.W. Stevenson and I got together in 1987 and I busted him for taking credit for writing ‘Shambala.’ He had this big grin on his face and said, ‘I never said that I wrote it.’ Then his grin got bigger and he said, ‘But I also never said that I didn’t write it.’ Poor guy died the next year from a staph infection after a heart valve operation in Nashville. The operation went fine, but 3 days later he got the staph infection and it killed him. So much for the hospitals in Nashville.

I probably would never have finished ‘My Maria’ without B.W.’s assistance. I had been working on the song for two years at the point I showed it to him. Of course, he wrote the rest of the lyrics in about 15 minutes. Bless his heart.”

B.W. Stevenson (B.W. = “Buck Wheat”) was a singer/songwriter from Dallas, Texas who died in 1988 at age 38. “My Maria,” featuring Larry Carlton on guitar, was by far his best-known song. It was a #1 hit on the Adult Contemporary chart.

A 1996 cover version by Brooks & Dunn was a huge Country hit, going to #1 and being named by Billboard as the Country Song of the Year. Their version also made #79 on the Hot 100.

My Maria don’t you know I’ve come a long, long way
I been longin’ to see her
When she’s around she takes my blues away
Sweet Maria the sunlight surely hurts my eyes
I’m a lonely dreamer on a highway in the skies

Maria, Maria I love you