Now, this was cool. I had a few friends with one but it was one thing I could not get. We lived on a dirt road with a gravel driveway. Big Wheels didn’t really work on gravel and dirt too well. I loved the pull-up brake you could engage on one wheel while you were coming to a stop and spin around.

You were low to the ground and with a good hill, you could really go. If it rained you would pedal that plastic wheel and go nowhere until you caught some traction.

The Big Wheel was developed by Louis Marx and Company in 1969. The toy was hugely popular in the 70s and 80s because of its low cost and partly because consumer groups said it was a safer alternative to the traditional tricycle or bicycle.

Different versions came out as it was copied by other companies. The Green Machine made by Huffy was a version of the Big Wheel. 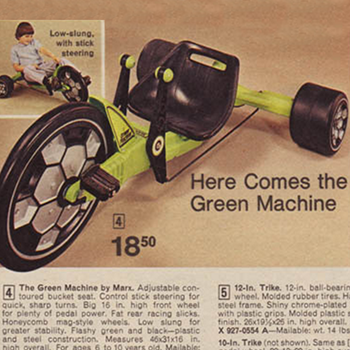 Just in case you want to own an iconic 1970s Big Wheel…not just a Big Wheel but a Big Wheel Deluxe with the box…no problem just shell out $2,500.