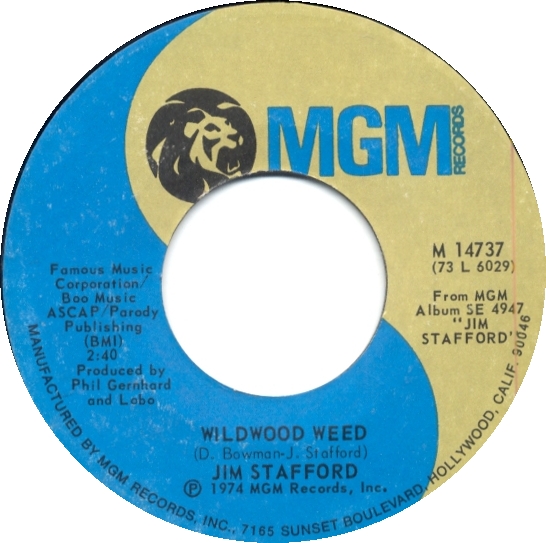 I usually don’t post novelty songs but I grew up with this one.

This song made me laugh as a kid. It’s about as corny as you can get but fun all the same. Jim Stafford had some novelty hits. His prime was 1973-1974. I had in my possession (from my sister) three of his hits. The Wildwood Weed, Swamp Witch, and his biggest hit “Spiders and Snakes.”

Jim has a sense of humor.

It didn’t take a genius to know what Wildwood Weed was about but the first time I heard it as an eight-year-old, an older neighbor had to tell me about it.

It made it to number 7 on the Billboard charts. It actually made it to #57 on the country charts which surprises me knowing how conservative country was at that time.

The song contains one of my favorite lines of all time. “Take a trip never leave the farm.” It’s about a bunch of country guys living on a farm and discovering pot…

The wildwood flower grew wild on the farm,
And we never knowed what it was called.
Some said it was a flower and some said it was weed,
I never gave it much thought ……
One day I was out there talking to my brother,
Reached down for a weed to chew on,
Things got fuzzy and things got blurry,
And then everything was gone!
Didn’t know what happened,
But I knew it beat the hell out of sniffin’ burlap.

I come to and my brother was there,
And he said, What’s wrong with your eyes?
I said, I don’t know, I was chewing on a weed.
He said, Let me give it a try.
We spent the rest of that day and most of that night,
Trying to find my brother, Bill.
Caught up with him, ’bout six o’clock the next morning,
Naked, swinging on the wind mill!
He said he flew up there.
I had to fly up there and bring him down,
He was about half crazy …..

The very next day we picked a bunch of them weeds,
And put ’em in the sun to dry.
Then we mashed ’em up and chopped ’em up,
And put ’em in the corncob pipe.
Smokin’ that wildwood flower got to be a habit,
We didn’t see no harm.
We thought it was kind of handy,
Take a trip and never leave the farm!

All good things gotta come to an end,
And it’s the same with the wildwood weed.
One day this feller from Washington came by,
And he spied it and turned white as a sheet.
Then they dug and they burned,
And they burned and they dug,
And they killed all our cute little weeds.
Then they drove away,
We just smiled and waved ……….
Sittin’ there on that sack of seeds!

6 thoughts on “A Novelty Song from the 70s – Wildwood Weed”