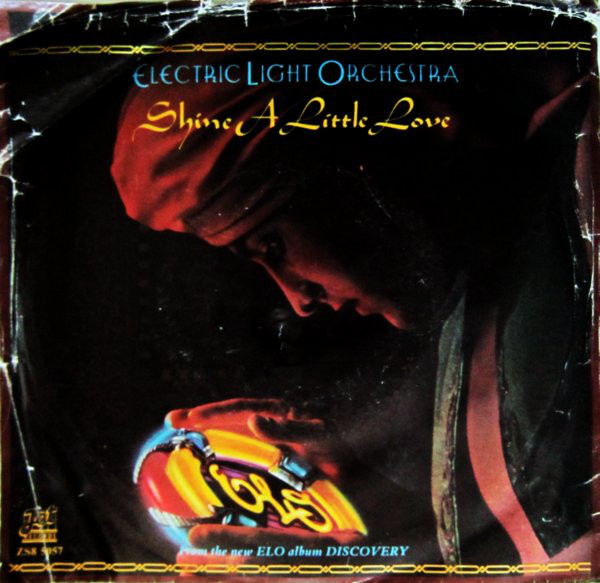 I had this album back in the 80s and enjoyed it straight through.

The introduction to Shine A Little Love on the Discovery album features a strange sounding choral piece with odd sound effects throughout.

This choral intro has been lifted from a German folk song recording called “Die Blümelein sie schlafen” (translates to “The Little Flowers, They Sleep”) written by Johannes Brahms.

For Shine A Little Love, a portion of a “Die Blümelein sie schlafen” recording was sampled, some distortion was done to it, various keyboard effects were added over it, and finally the whole recording was slowed and flipped backwards. Because of all the manipulation, it’s been incredibly difficult to identify.

The actual source of the recording sampled in Shine A Little Love is uncertain, but it is a choral recording.

This section is missing from the single version and several compilation releases of the song and may well be considered an introduction to the Discovery album as a whole and not so much an intro to Shine A Little Love.

The album version with the intro

Although the things you’ve done I wouldn’t criticize.
I guess you had your way.
You see I gotta make you understand.
I know it sounds a foolish thing to say.
But it don’t matter baby ‘cos’ today’s another day.

Can you understand.(Yes I understand) Can you feel it’s right.
(I know it is) Will you be the same.(I’ll do it all again).

It’s been a year now and it’s getting so much better.
You came home without a word.
Though everybody said you’ll soon forget her.
Thay couldn’t see and they just didn’t understand.
And lookin’ in the mirror there were fools at either hand.

Can you understand.(Yes I understand) Can you feel it’s right.
(I know it is) Will you be the same.(I’ll do it all again).

How many days had I been waiting there to tell you.
I really can’t believe.
We’re walkin’ out into the world tonight.
We’ll do it all again until the break of light.
And the feelin’ in your heart will soon be shinin’ in your eyes