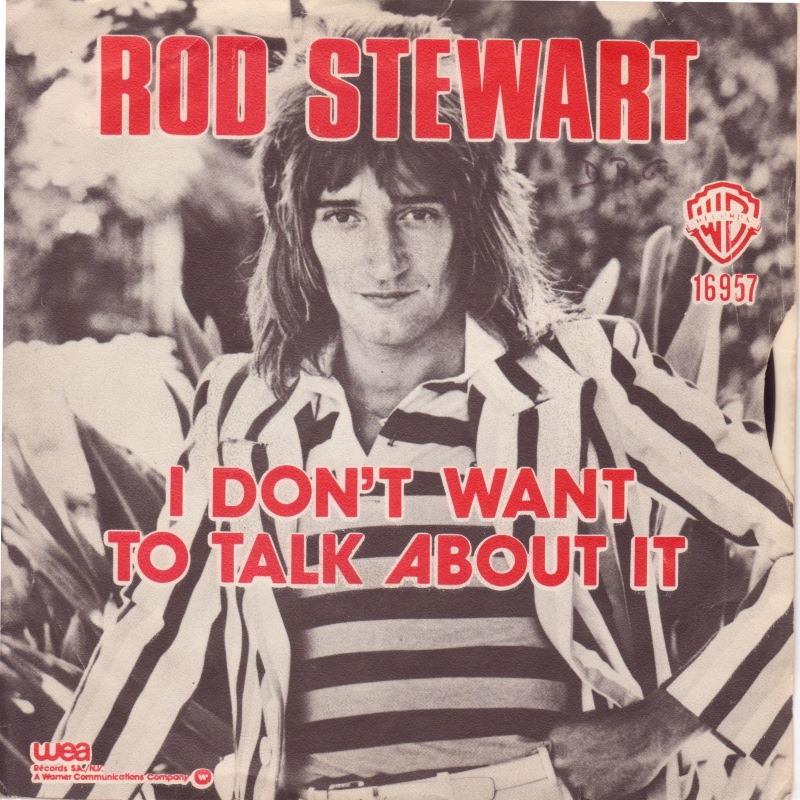 Rod Stewart has gone through many phases of his career. He started off as a rocker and his voice was one of the best around in an era of great voices in the late 60s and early 70s. I liked the Faces era and his early solo acoustic-based songs a lot. His Mercury albums are for the most part very good.

Danny Whitten wrote this song while he was in Crazy Horse.  Danny was a creative force in the group as their rhythm guitarist and lead vocalist. Whitten was battling a heroin addiction at the time and died a year later when on November 18, 1972 he overdosed and died. Crazy Horse released a self-titled album with this song included.

Rod Stewart recorded this song for his 1975 album Atlantic Crossing, which was produced by Tom Dowd.

The Sex Pistols topped the charts of most major British music publications with “God Save The Queen,” which mocked the monarchy and the celebrations. The Sex Pistols’ song suspiciously stalled at #2 on the official chart, placing behind Rod Stewart’s version of “I Don’t Want To Talk About It.” There were many accusations that the chart was rigged to avoid embarrassment in the week of the jubilee.

Nils Lofgren, who was also in Crazy Horse, recalls in the book 1000 UK #1 Hits by Jon Kutner and Spencer Leigh: “Danny was a very soulful man and a good man and he was the one who got me in Crazy Horse. I loved his song, ‘I Don’t Want To Talk About It,’ and I think it is one of the greatest ballads ever. It has a very haunting lyric and put two lines into the song because Danny was so ill when he recorded it. He could still sing and play but he wasn’t bothered with much else. We said, ‘Danny, we’ve got to do this song, it’s a great song’ and he said, ‘It needs a second verse’ and this went on for months. He never could get it together and then we were in the studio and got in an argument, and he said, ‘Okay, well, one of you write it.’ I left the studio and wrote a couple of lines quickly and I said,’What about these” and he said, ‘Fine, let’s do it’. Danny and I sat opposite each other with acoustic guitars and Ry Cooder was playing slide on his lap and it came out beautifully.”

The Crazy Horse album was an assemblage of top-tier musicians and producers. Along with Danny Whitten and Nils Lofgren, Jack Nitzsche, Ry Cooder, Billy Talbot and Ralph Molina played on it, and it was produced by Nitzsche and Bruce Botnick.

It enjoyed just modest sales, but was adored by critics, including John Mendelsohn, who called this song an “unexaggerably lovely ballad” in his Rolling Stone review.

Whitten never got to perform the song with Crazy Horse, as his addiction pushed him out of the group. He was replaced by George Whitsell, who played on the group’s next album, Loose, released in 1972. Whitten picked up again with Neil Young’s band, but again his addiction led to his dismissal.

However, at the Christmas concerts Stewart gave in London that year, he was taken aback when his fans started singing the chorus to “I Don’t Want To Talk About It” along with him – continuing even when he dropped out to watch them. Because of their obvious enthusiasm for this song, Stewart’s label decided to issue it as his next single. Since so many of Rod’s followers already had Atlantic Crossing, a track from Night On The Town, “The First Cut Is The Deepest,” was included on the flip side and issues as a double-A side disc. The single went to #1 for four weeks in the UK.

In 1988 the duo Everything But The Girl recorded a cover version which bought them their first UK Top 10 hit when it climbed to #3.

They recorded the song at a time when they were frustrated with the lack of success from their first three albums and the constant criticism revolving around their change of sound with every record. Ben Watt of the duo explained to Q in 1996 that covering this song was in response to never being able to please everyone, stating: “When we did ‘I Don’t Want To Talk About It,’ we were almost trying to say, ‘F–k you then! We’ll do a cover version, that’s what you really meant.'” Watt angrily continued, “And of course it went to #3, and completely backfired again!”

EBTG vocalist Tracey Thorn echoed Watt’s thoughts in 2012 to The Quietus when asked about the annoyance of the song being added to the beginning of their album Idlewild when it became an unexpected success. Said Thorn: “Obviously the trouble with having a hit with something like a cover of a ballad, you attract a whole new set of listeners. Which is great, but on the other hand they start to pigeonhole you a little bit, and there was a period around that time where for a few years after where we did pick up an audience that began to get older and expect certain things from us.”

Stewart sang this song as a duet in his concert One Night Only! Live at Royal Albert Hall, with Amy Belle. Stewart told the audience, “A week ago this girl was busking the streets of Glasgow,” and he felt that it was his right to bring her into the limelight because “I was discovered busking at a train stop.”

Nils Lofgren recorded a new version of this song for his 2015 solo album UK2015 Face the Music Tour.

I Don’t Want To Talk About It

I can tell by your eyes
That you’ve probably been cryin’ forever
And the stars in the sky
Don’t mean nothin’ to you, they’re a mirror

I don’t wanna talk about it
How you broke my heart
If I stay here just a little bit longer
If I stay here, won’t you listen to my heart?
Whoa, heart

If I stand all alone
Will the shadow hide the color of my heart?
Blue for the tears, black for the night’s fear, heart
And the stars don’t mean nothin’ to you, they’re a mirror

I don’t wanna talk about it
How you broke my heart
If I stay here just a little bit longer
If I stay here, won’t you listen to my heart?
Whoa, heart, my heart, whoa, heart