I remember this single because of the label…it was given to me when I was around 10. I love the artwork of many of these old singles. The music is not that bad either with this one. 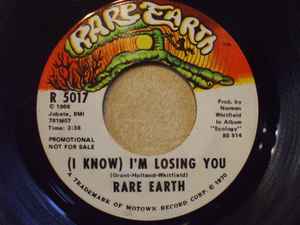 Rare Earth began as a popular Detroit club band called The Sunliners in 1960. They couldn’t get anywhere for years. The band decided that part of the problem might lie in their name and that a more contemporary one was needed.   The band came up with Rare Earth which seemed cool, back to nature, and more reflective of the times.

They were then introduced to Barney Ales the vice-president of Motown Records.  Ales had come to see the band on the recommendation of Berry Gordy’s ex-wife Margaret who was acquainted with Rare Earth’s manager. Barney Ales was looking for white rock acts for a new Motown division that reflected the album rock that was growing on FM radio at that time.

This was Rare Earth’s follow-up to their hit Get Ready. Motown pressured Rare Earth to record another Temptations hit, this time with Norman Whitfield – who had co-written and produced the original version.

Members of the band started dropping out and being replaced beginning in 1971. The group stopped touring together in 1974 when a split happened. Two members, including original member Peter Hoorelbeke, left to form a short-lived group called HUB.

The remaining Rare Earth members continued with replacements and recorded Back to Earth in 1975. They produced seven more albums and continue to tour. A roster of band members from 1960 to the present contains over 30 different musicians, with founding member Gil Bridges being the only constant.

Lead singer Pete Rivera: What made it so interesting, was that he actually got on our case for trying to sound like the Temps the first time we did the song the way we thought it should be. Whitfield listened for a while and then he spoke up and said, ‘You guys sound great on this tune, but I think you should give it a different flavor and presentation.

“The song was originally about 45 minutes long, Norman cut it down to 12 minutes for the album [Ecology] and then down to 3 minutes for the single. He was a master at editing.”

Ah, woman, woman your touch, your touch has gone cold
As if someone else controls your very soul
I’ve fooled myself long as I can
Can feel the presence of another man

When I look into your eyes
A reflection of a face, I see
I’m hurt, down-hearted and worried, girl
‘Cause that face doesn’t belong to me
It’s all over your face
Someone’s takin’ my place
Ooh, baby, I’m losing you
You try hard to hide
The emptiness you feel inside
Ooh, babe, I’m losing you