*** This week is the last round of the TV draft. I won’t be posting a music post after today until July 4th. Hope you all have a great week! Enjoy the TV Draft!***

I liked this song when it was released… MTV played the video in a heavy rotation for a while. I saw them in 1982 opening up for a popular Billy Squier at the time. Squier was good but I was looking forward to Nazareth a bit more because of a childhood full of Hair of the Dog.

Dan McCafferty has such a recognizable voice. When I saw them the volume on his voice was at 11. On top of being very loud he would scream as he talked… it looked like it was just natural for him but when the songs started…he sounded great. There was no way the instruments were drowning him out.

Holiday was co-written by all five members of Nazareth for their Malice in Wonderland album in 1980. They toned down their heavy sound for this album and made it more radio-friendly. That paid off with this minor hit in the US. I always liked the cover of this album. 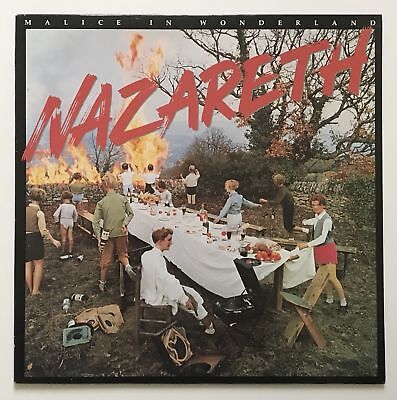 They will forever be remembered for the album Hair of the Dog released in 1975 with the hit single Love Hurts. Holiday peaked at #87 on the Billboard 100 and #21 in Canada in 1980. The album Malice in Wonderland peaked at #41 on the Billboard Album Charts and #19 in Canada.

In 1968 this Scottish band was named The Shadettes…they changed their name to Nazareth. This was not inspired by the Biblical birthplace of Jesus of Nazareth. It was inspired by a line in a song called The Weight by The Band. The lyrics were “I pulled into Nazareth, was feelin’ about half past dead…”

In this case, Nazareth referred to Nazareth, Pennsylvania. Robbie Robertson chose to place the lyrics in Nazareth because it was the home of Martin Guitars. Robertson wrote the song on a 1951 Martin D-28 guitar.

The band is still touring. In 2013, lead singer Dan McCafferty retired from touring with Nazareth. In 2018 Nazareth released their 24th studio album, Tattooed on My Brain. The current lineup has Carl Sentence on lead vocals, Pete Agnew on bass guitar, Jimmy Murrison on lead guitar, and Lee Agnew on drums.

Some trivia about the video. The video game the teen is playing is Super Road Champions, made by Model Racing in 1978.

She’s pushin’ way too hard
I don’t want any part of her way
Drinkin’ my wine, makes me feel fine,
Gonna have me a holiday.

Drinkin’ my wine, wastin’ my time
Hidin’ out in my rented dream
Lookin’ for attention
A cover story mention in
Life magazine
Ask the chauffeur who he knows
Numbers he’s got, lots of those.

Drinkin’ my wine, spendin’ my time
Tryin’ to run from this halloween.