This is John in his “Cougar” days. It was right before the floodgates opened for him with the album American Fool that would come in 1982.

This song came off of his 4th studio album Nothing Matters and What If It Did released in 1980.  Ain’t Even Done With The Night peaked at #17 in the Billboard 100 and #15 in Canada. Mellencamp wrote the song. 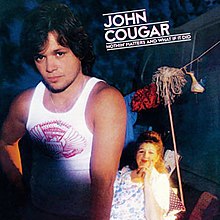 He has been asked what is the worse thing he ever did for success. He replied that would be changing his name to Johnny Cougar but the record company had him in a corner.

In 1983 after the hugely successful American Fool album John had enough leverage to force his record company to use his real name. It would now be John Cougar Mellencamp.

John Mellencamp: “I have probably never gotten along with any record company executive ever, except maybe one,”  “And if they were such good businessmen, why aren’t they running Coca-Cola or other major corporations now?”

John Mellencamp: “I see things that other people don’t see,” he said in his Plain Spoken DVD. “I pay attention to detail. That’s where my songs come from. They’re not about me.”

John Mellencamp got married at 18 and had his first child a short time later. He knew the vagaries of young romance and fear of commitment quite well, which certainly qualified him to write this song about a couple deeply in love, with the guy unsure what to do and the girl reassuring him.

This method of songwriting proved very successful and comes into play on this song: There was probably a time when your heart was beating like thunder, etching a memory so powerful you can remember the song that was playing on the radio.

This song came during a transitional period for Mellencamp, after his first hit but before his star turn. In 1978, “I Need A Lover,” a song from his second album, took off in Australia, giving him a leg up on the other young rockers he was competing against. From there, he set out to create hits, which he felt was essential to his survival – he was a strong-willed, hard-headed country boy who didn’t get along with his record label and most industry folks, so unless he could become invaluable, he wasn’t going to make it.

“Ain’t Even Done with the Night” came from his quest to make hit pop songs, and even thought he has shown no affinity for it, the song became one of his most enduring, showing up on playlists decades after it was first released.

It helped keep him on the charts until his breakthrough fifth album, American Fool, with the hits “Hurts So Good” and “Jack & Diane.” After that, he no longer had to care even a little what people think. His songs that followed are the ones he considers his best work.

Steve Cropper, who produced Otis Redding and many other acts at Stax Records, produced the Nothin’ Matters And What If It Did album.

Ain’t Even Done With The Night