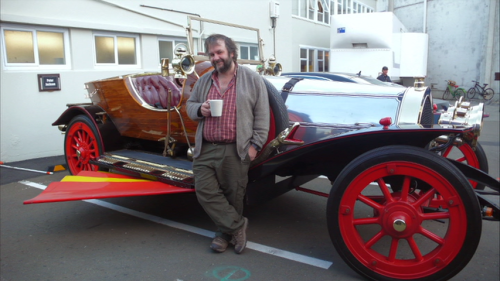 For my eighth birthday, I was given the Chitty Chitty Bang Bang soundtrack. I loved the movie so much that my mom got it for me. The movie is a classic…and what’s not to like… a flying car…that is all it took to get my attention and the catchy theme song.

Chitty Chitty Bang Bang found fame in the 1968 children’s movie of the same name starring Dick van Dyke. The magical car not only traveled on land but could fly and also float on water. The car was designed by the film’s production designer, Ken Adam.

The original driving car that was used in the film and the final product weighed approximately 2 tons, was 17 feet long, and built on a custom made ladder frame chassis.

The alloy dashboard plate was from a British World War I fighter plane. All of this was built around a modern Ford V6 engine with Automatic transmission. Chitty rolled out of the workshop in June 1967 and was registered with the number plate GEN 11 given to her by Ian Fleming in his novel.

For the 1968 film, six cars were created, this one was the fully functional road-going car.

The acclaimed Lord of the Rings director Peter Jackson purchased the car. Jackson has since used the vehicle to raise money for charities in various capacities. The car is kept in New Zealand where it is registered as GEN 1I, because the original Gen 11 Plate was already taken.

14 thoughts on “Where is… the Chitty Chitty Bang Bang Car Now?”