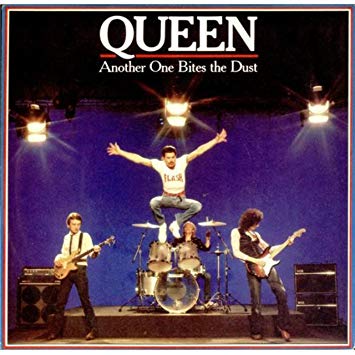 “Steve walks warily down the street…with the brim pulled way down low.  Ain’t no sound but the sound of his feet…machine guns ready to go.”

Supposedly Steve McQueen is Steve in the opening lyrics. Steve died the year this was released on November 7, 1980.

You couldn’t go anywhere in 1980 without hearing someone sing, whistle, or hum this song. I remember the high school band did a version of it.

Brian May: “Freddie sung until his throat bled on Another One Bites The Dust. He was so into it. He wanted to make that song something special.”

The song peaked at #1 in 1980 in the Billboard 100. It was on the album The Game…which also peaked at #1 in 1980. While the band and producer Reinhold Mack were mixing the track, Brian May’s roadie suggested it be released as a single; the band didn’t like the idea but were finally talked into doing it when Michael Jackson, after a concert, suggested the same idea.

This is one of the hardest Queen songs to understand. The opening line reads, “Steve walks warily down the street, his brim pulled way down low. Ain’t no sound but the sound of his feet, machine gun ready to go…” Also, the last phrase spoken in the song is not “Shoot Her” or “Shooter,” but “Shoot Out.”

Though probably not intentional unless someone did an excellent splicing job, the “another one bites the dust” line quite clearly says “decide to smoke marijuana” when played backwards. This is especially clear toward the end of the track when Mercury repeats the line with only the drums playing.

Deacon was influenced by the Chic song Good Times. In an interview with the New Musical Express, Chic bass player Bernard Edwards said: “Well, that Queen record came about because that bass player spent some time hanging out with us at our studio. But that’s OK. What isn’t OK is that the press started saying that we had ripped them off! Can you believe that? ‘Good Times’ came out more than a year before, but it was inconceivable to these people that black musicians could possibly be innovative like that. It was just these dumb disco guys ripping off this rock ‘n’ roll song.”

Deacon played most of the instruments on the track: lead and rhythm guitars, bass, reversed piano and additional percussion. Brian May did some guitar effects with harmonizer (in the interlude), and Roger Taylor played the drum loop. Surprisingly, there are no synthesizers.

The drum track and the handclaps were looped. They repeat throughout the song.

John Deacon claimed in a 1980 interview that Roger Taylor opposed the song’s drumbeat. This is backed up by the comments of several figures in the Days of our Lives documentary, who noted that Taylor hated having tape put on his drums to deaden the sound.

However, the drummer denied this in an interview with Mojo magazine in October 2008. He insisted: “I’d already had an ineffectual pop at that kind of music with ‘Fun It,’ on the Jazz album. I was never against ‘Another One Bites The Dust,’ but I was against releasing it as a single.”

In 1998, this was used in a commercial for AIWA sound systems. In the ad, a guy drives around with this blaring from his car stereo. At the end of the commercial, we realize he is driving a hearse.

During the production of the movie Rocky III, this was used in a key scene where Rocky is training for a fight. Producers could not get permission to use the song, so Sylvester Stallone hired Survivor to write an original song instead, which turned out to be “Eye Of The Tiger.”

Queen were originally reluctant to release this as a single, but backstage after a Queen gig at the Los Angeles forum, a visiting Michael Jackson convinced them it would be a hit. “Michael and all his brothers were all going, ‘That’s a fantastic track. You must release it,'” recalled Queen drummer Roger Taylor to Q magazine December 2009.

This meeting lead to several recordings and collaborations between Freddie Mercury and Jackson, all of which remain unreleased.

This was the single that really broke the band in America, and it garnered a huge following amongst American disco audiences, with many fans and journalists convinced it was a black man singing lead vocals (these people obviously hadn’t heard of Queen before so didn’t know what Freddie looked like). The band occasionally were unsure of how to deal with this – Roger Taylor jokes in the Days of our Lives documentary of having fans shouting “you guys are bad!” in the street, and he had to ask “does that mean good or what?”

This was used in a 2016 commercial for the Hyundai Genesis that first aired on the Super Bowl. In the spot, Kevin Hart uses the Car Finder app to track down the guy who is using it to take his daughter on a date. After tormenting her suitor, Hart says, “A dad’s gotta do what a dad’s gotta do.”

Another One Bites The Dust

Steve walks warily down the street
With the brim pulled way down low
Ain’t no sound but the sound of his feet,
Machine guns ready to go

Are you ready, hey, are you ready for this?
Are you hanging on the edge of your seat?
Out of the doorway the bullets rip
To the sound of the beat

How do you think I’m going to get along
Without you when you’re gone?
You took me for everything that I had
And kicked me out on my own

Are you happy, are you satisfied?
How long can you stand the heat?
Out of the doorway the bullets rip
To the sound of the beat

Oh shooter
There are plenty of ways that you can hurt a man
And bring him to the ground
You can beat him, you can cheat him
You can treat him bad and leave him when he’s down

But I’m ready, yes, I’m ready for you
I’m standing on my own two feet
Out of the doorway the bullets rip
Repeating to the sound of the beat oh yeah

12 thoughts on “Songs That Reference Steve McQueen: Queen – Another One Bites The Dust”