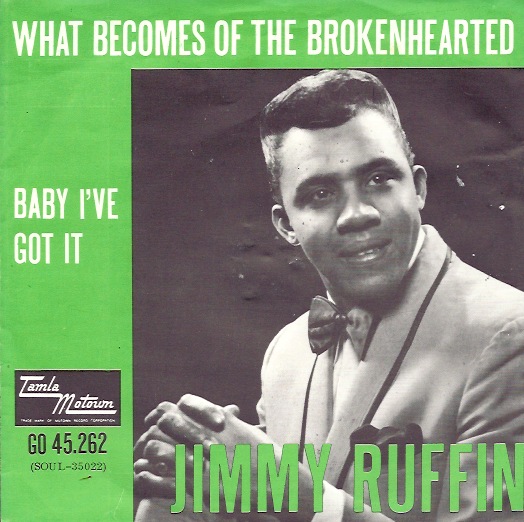 Jimmy Ruffin was the brother of then Temptation David Ruffin. This was written by Motown writers Jimmy Dean, Paul Riser, and William Witherspoon. They wrote it for The Detroit Spinners, but Ruffin convinced the Motown writers to let him try it, and they liked what they heard.

I think Motown has been the soundtrack to more breakups than anyone else. This song peaked at #7 in the Billboard 100 in 1966. The great Smokey Robinson produced this track. He worked on many Motown classics as an artist, writer, and producer. This would be Jimmy’s biggest hit of his career.

Many Motown songs deal with heartbreak, but this one is especially bleak. The poor guy has recently joined the ranks of the brokenhearted, and he’s not sure what happens next. He knows he can’t take the pain much longer, but keeps coming up empty in his search.

Originally, this contained a spoken intro:

It was cut out before the song was released, but the version with the intro did appear on a British compilation which also included Ruffin’s version of the song in Italian (“Se Decidi Cosi”).

Other Motown acts to record this song include Diana Ross and The Supremes, who did a cover of this for their album Let the Sunshine In, and The Contours, who did it at a faster tempo. Both of these versions contain the spoken intro.

Dave Stewart (not the one from Eurythmics) released a keyboard-driven version of this song in 1980 with Colin Blunstone of The Zombies on vocals. This rendition, which had Amanda Parsons and Jakko on backing vocals, made #13 UK.

The British duo Robson & Jerome took this song to #1 in the UK when they released it as a single along with covers of “Saturday Night At The Movies” and “You’ll Never Walk Alone.”

Vonda Shepard recorded this for an episode of the TV series Ally McBeal.

The Isley Brothers recorded a version entitled “Smile” that is the same exact backing track with different lyrics and phrasing. It can be found on the Motown Sings Motown Treasures album.

Paul Young recorded this for the 1991 movie Fried Green Tomatoes. His version went to #1 on the US Adult Contemporary charts and made #22 on the Hot 100 (the only version besides Ruffin’s to make this chart).

On an episode of the TV series JAG, Col. MacKenzie plays the song on a jukebox in a bar, lamenting her breakup with Mick, the Australian naval officer. Mac, Bud (who was having romantic issues with Harriet) and Lt. Rabb (who just broke up with girl friend) are all sitting at the bar singing along with the song unaware of the others’ romantic issues.

The theme song from the 1992 Whitney Houston film The Bodyguard was Dolly Parton’s “I Will Always Love You,” but according to her leading man Kevin Costner speaking at her funeral in February 2012, the first choice was this song, which ended up being used in Fried Green Tomatoes (the Paul Young version).

What Becomes of the Broken Hearted

22 thoughts on “Jimmy Ruffin – What Becomes of the Broken Hearted”