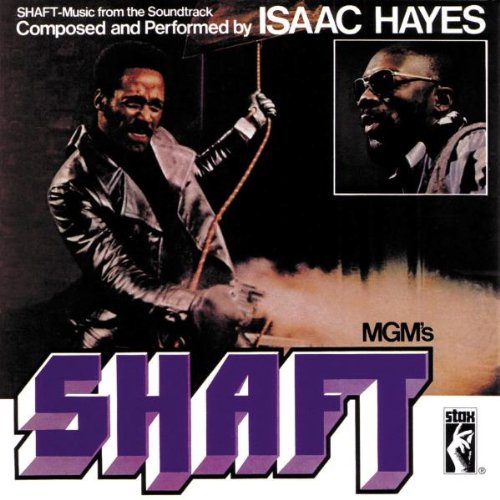 Shaft peaked at #1 in the Billboard 100 in 1971. In the beginning, the high hat starts and then that cool seventies wah wah pedal kicks in..a coolness just washes all over you.

Isaac Hayes was a songwriter for Stax records before he became a successful recording artist. He wrote some hits for Sam & Dave, including “Soul Man” and “Hold On I’m Coming.” Hayes explained Shaft: “The character Shaft was explained to me: a relentless character always on the prowl, always on the move. I had to create something to denote that. Otis Redding’s ‘Try A Little Tenderness,’ I had a hand in arranging that. At the end, Al Jackson was doing some stuff on a hi-hat, and I thought if I sustained that kind of thing on a hi-hat, it would give a relentless, dramatic effect, and it worked.”

The instruments were played by Memphis funk group The Bar-Kays. For a while, they were Otis Redding’s backup band… Can you dig it? “Shaft”

This was featured in the 1971 movie of the same name starring Richard Roundtree. It was remade in 2000 starring Samuel L. Jackson as Shaft. Hayes made an uncredited appearance in the remake, but that wasn’t what he had in mind. According to Q magazine, Hayes agreed to write the Shaft theme after being promised the lead role but the promise wasn’t kept – he didn’t even get an audition.

This won a Grammy for Best Instrumental Arrangement and an Oscar for Best Original Score. The Oscar win made Hayes the first African-American to win an Academy Award in a composer category.

Future actress (she was on the TV shows Bosom Buddies and Family Matters) Telma Hopkins was one of the backup singers. That’s her saying “Shut Your Mouth!”, which became a bit of a catchphrase for Hopkins, whose character would often say it on her shows. Joyce Wilson was the other backup singer; she and Hopkins performed as Tony Orlando’s backup group Dawn.

The distinctive funk guitar and hi-hat cymbals make this a very recognizable song. It is often used in commercials and TV promos, sometimes with the product name put in place of the word “Shaft.”

Hayes was the voice of “Chef” on the TV show South Park. Despite being a cartoon, Chef usually found an opportunity to sing on each show.

There was also a TV version of Shaft, which lasted one season on CBS in 1973. Hayes contributed music to the series.

When Hayes was inducted into the Rock and Roll Hall of Fame in 2002, he opened the ceremonies with this song.

Bart and Lisa sing this on The Simpsons episode “One Fish, Two Fish, Blowfish, Blue Fish.”

Shaft
Who’s the black private dick
That’s a sex machine to all the chicks?
(Shaft!)
You’re damn right
Who is the man
That would risk his neck for his brother man?
(Shaft!)
Can ya dig it?
Who’s the cat that won’t cop out
When there’s danger all about
(Shaft!)
Right on
You see this cat Shaft is a bad mother
(Shut your mouth)
But I’m talkin’ about Shaft
(Then we can dig it)
He’s a complicated man
But no one understands him but his woman
(John Shaft)