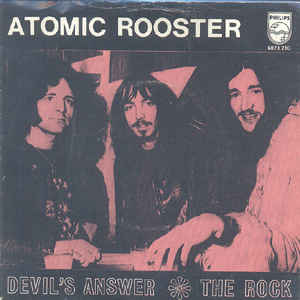 Atomic Rooster… Now that is a name. I’ve been in short term bands with different names such as… “The Flying Junebugs”, “The Cryin ‘Shame” and “Green Swingset” but Atomic Rooster is unique. Atomic Rooster was an English rock band, originally composed of former members of The Crazy World of Arthur Brown. Throughout their history keyboardist, Vincent Crane was the only constant member and wrote the majority of their material.

This is another song I noticed on the Life On Mars series in the mid-2000s.

Their history is defined by two periods: the early-mid-1970s and the early 1980s. Their genre in music is difficult to define since they went through radical changes in very short times during the life of the band. However, their best-known era represented a more hard rock/progressive rock sound, exemplified by their only hit singles, Tomorrow Night (UK No. 11) and The Devil’s Answer (UK No. 4), both in 1971.

People are looking but they don’t know what to do
It’s the time of the season for the people like you
Come back tomorrow, show the scars on your face
It’s a clue to the answer we all chaseThree, five and seven lift the heaviest load
reach the top of the heaven that’s fallen below
Devil may care but you wish for the best can’t you see there’s an answer that lies there
Come all you sinners and keep with the time
can we see all the faces that have fallen behind
Don’t make the reason it’s a secret for you