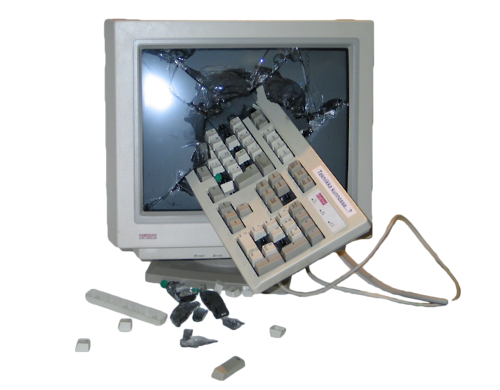 I have worked in IT for twenty years and back in the 90’s, I got my start by working on a Helpdesk for a restaurant chain. Back in the late 90s people just didn’t know much about computers…they were hired to serve, cook or whatever… not to be a tech. I couldn’t stand the rude techs who talked down to people. It took patience at times but it was nice helping people.

But…it was hard not laughing at times. Some people thought a computer didn’t work with the natural laws of life like everything else.

I took one call from a lady named Sally. She told me her computer would not turn on. Well, I had Sally go through the cords and electrical cables on the back of the computer right after checking the power button. This restaurant she was working at had a very small office…not too much bigger than a broom closet. Anyway, I was walking her through it and describing what she was looking for…

I hear her moving things around and I heard her say OOOW! I didn’t think anything of it but then I heard an OOHHHH! I asked her if she was alright and she said yes she had hit her head. Ok, we continued on our journey and  I was telling her to make sure it was plugged in…another very loud BUMP…OOWW… She said she hit her head again.

I asked her again if she was alright…Sally was a trooper…I thought maybe a little clumsy but a trooper nonetheless.

Sally then proceeded to tell me that the electricity had been out in the office for over an hour.

Holding back the laughter I told Sally that could very well explain her computer problem.