Thanks to msjadeli (Lisa) for suggesting The Black Keys.

Dan Auerbach of the Black Keys describes a Ten-Cent-Pistol as “this low-rent, heinous substance that disfigures you, like homemade napalm.” In the song, a woman takes revenge on her cheating man and his mistress by throwing the acid on their faces. 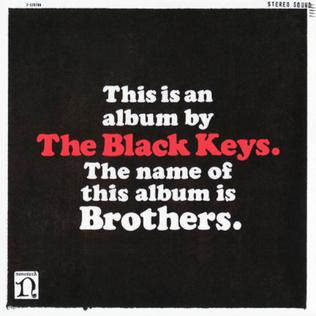 Another definition for Ten Cent Pistol is Drugs (usually heroin) laced with lethal amounts of poison. Arsenic is common. Used as revenge against addicts and dealers alike.

The song is smooth and I love his voice…it sounds old…it sounds like his voice is coming out of a 1950s radio yet the music is not.  It would have fit on the Pulp Fiction soundtrack easily.

This was one of 10 songs from the Brothers album that The Black Keys recorded at Muscle Shoals Sound Studios in Sheffield, Alabama. From 1969-1978, the studio was owned by the famous Muscle Shoals Rhythm Section, who recorded classic tracks like “I’ll Take You There” and “Old Time Rock And Roll” there. In 1999, Noel Webster bought the studio and eventually re-opened it. The Black Keys, in search of a classic southern studio and a vintage Soul sound, booked the place for two weeks, and spent 10 days in the area before heading back to Akron, Ohio, which seemed cosmopolitan by comparison. There’s no real nightlife in Muscle Shoals, so artists quickly get down to business, which is what Auerbach and Carney did, setting up at 10 a.m. and using an array of old instruments.

Mark Neill, who produced this track with the band, discussed the instrumentation on this song in a track-by-track on The Black Keys Fan Lounge: “Ten Cent Pistol is a slightly jazzy tune with very Ethiopian sounding 12 string guitar on it. It’s a cheap Harmony 12 string. It sounds like a lot of that incredible African guitar sound, incredible sounds out of simple instruments. It reminds me a lot of that. Two different groups come to mind that had a feel that reminds me of this. The 12 string lead on it reminds me of something very African.

I would say, other than ‘These Days,’ you are hearing his two Harmony guitars. And there are a few instances of a Supro guitar, which he gets a really unique sound out of. All of the recording gear at Muscle Shoals including the 1956 Gretsch drums, bass, guitar amp are from Soil of the South (Neill’s collection of vintage equipment). Dan and Pat brought congas, and various electronic keyboards as well as Dan’s guitars as well as a Music Master Fender bass amp for fuzz!”

There’s nothing worse
In this world
Than pay-back from a
A jealous girl
The laws of man, they don’t apply
When blood gets in a woman’s eye

Stars did fall
Thunder rolled
Bugs crawled back
In their holes
The couple screamed, but it was far too late
Her jealous heart did retaliate