This song was off of the 1983 album Hootenanny. This was their third release and second album. The album was all over the place style wise but it works.

For the album cover they found a  1963 Crestview Records folk sample album and changed the type. 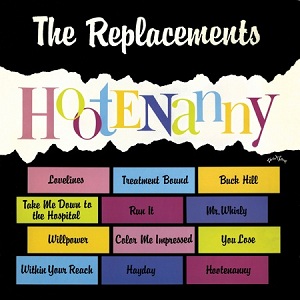 What first caught my ear was the unorthodox solo that Bob Stinson played. You can hear the feedback from the guitar before he starts it.

The band never sold many records but they influenced many musicians and as it turns out movie makers.

Daniel Waters wrote the black comedy “Heathers” movie in 1989. He was such a fan of their music that Waters peppered his script with Replacements references…from the school being Westerburg High (the spelling of Paul’s surname was changed at the urging of a film exec who felt that the name Westerberg seemed “a little too Jewish” for a Midwestern high school) to male lead J.D. (Christian Slater) and one of the Heathers saying, “Color me impressed.”

He also wanted to use a Replacements song in the credits but there was no money to buy the rights.

Paul Westerberg about Hootenanny: “You could hear me more or less trying to find my voice, or trying to find out where I fit in…a way of trying to fuse what I had been listening to growing up into what was happening at the time.”

Put the party on the mirror
Oh shit, pass the bill to Chris
Intoxicated lover ending our french kiss

25 thoughts on “Replacements – Color Me Impressed”