The guitar intro is instantly recognizable and although I’ve heard it so many times I still like it.

Zeppelin bass player John Paul Jones got the idea for this song after hearing Muddy Waters’ 1968 album Electric Mud. He wanted to try to write electric blues with a rolling bass part.

The song was credited to Jones, Plant, and Page. the song was on what was known as their greatest album Led Zeppelin IV. It was recorded at Headley Grange a then run down country cottage. It was originally built in 1795 as a  three-storey stone structure which was originally used as a workhouse for the poor, infirm, and orphaned.

The album Led Zeppelin IV was a major success and peaked at #2 in the Billboard Album Charts, #1 in Canada, and #1 in the UK. 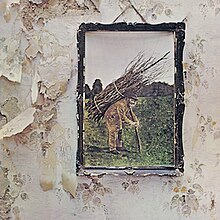 Jimmy Page on recording in Headley Grange: “The reason we went there in the first place, was to have a live-in situation where you’re writing and really living the music. We’d never really had that experience before as a group, apart from when Robert Plant and I had gone to Bron-Yr-Aur. But that was just me and Robert going down there and hanging out in the bosom of Wales and enjoying it. This was different. It was all of us really concentrating in a concentrated environment and the essence of what happened there manifested itself across three albums (IV, Houses of the Holy, Physical Graffiti).”

It was unusual for a Zeppelin song because it was released as a single and peaked at #15 in the Billboard 100, #11 in Canada, and #10 in New Zealand. It was not issued as a single in the UK.

John Paul Jones: “I actually wrote it in rehearsal from Jimmy’s house on the train. My dad was a musician and he showed me a way of writing down notation on anything. And so I wrote the riff to ‘Black Dog’ on the back of a train ticket which I unfortunately don’t have.”

Andy Johns (Engineer): “It was more fun and more serious than for Led Zeppelin III. We mainly recorded it in Headley Grange – a haunted place – using the Rolling Stones mobile recording unit. The rest of the album was produced at Island studios, an old church. We recorded the main tracks for ‘Black Dog’ downstairs, in what used to be the crypt. The main tracks for ‘Stairway To Heaven’ were recorded in the big room upstairs.”

The title does not appear in the lyrics, and has nothing to do with the song itself. The band worked up the song at Headley Grange, a mansion in Hampshire, England that is out in the country, surrounded by woods. A nameless black Labrador retriever would wander the grounds, and the band would feed it. When they needed a name for this track, which didn’t have an obvious title, they thought of the canine and went with “Black Dog.”

Jones rarely had completed songs together, but the bits and pieces he brought to Led Zeppelin’s writing sessions proved worthy. When they started putting the album together, Jones introduced this riff, the song started to form. The first version Jones played was comically complex. “It was originally all in 3/16 time, but no one could keep up with that,” he said.

When the mobile recording studio (owned by The Rolling Stones) showed up at the mansion, this song was ready to go and recorded there.

This is the first track on Led Zeppelin 4, which became the band’s best-selling album. A wide range of musical styles show up on the set, with “Black Dog” exemplifying the blues-rock that was the bedrock of the band’s sound.

The album itself is technically untitled, with symbols on the cover instead of words., but since it was their fourth album, it became known as Led Zeppelin 4. Some fans also referred to it as “ZoSo,” which is a rough translation Jimmy Page’s symbol.

In this song, Robert Plant is singing about a woman who appeals to his prurient interests, but is clearly no good for him – he tells himself he’d rather have a “steady rollin’ woman” come his way.

Robert Plant explained in an interview with Cameron Crowe: “Not all my stuff is meant to be scrutinized. Things like ‘Black Dog’ are blatant, let’s-do-it-in-the-bath type things, but they make their point just the same.”

The start-and-stop a cappella verses were inspired by Fleetwood Mac’s 1969 song “Oh Well.” Before Stevie Nicks and Lindsey Buckingham joined Fleetwood Mac in 1974, they were more of a Blues band led by guitarist Peter Green. Jimmy Page and The Black Crowes performed “Oh Well” on their 1999 tour and included it on the album Live At The Greek.

The lyrics never approached “Stairway To Heaven” level scrutiny, but were still subject to some interesting interpretations. Jimmy Page’s interest in the occultist Aleister Crowley, combined with the image of the Hermit (from the Tarot) in the album art and the band’s disappearance when they set off to Headley Grange to record, led some listeners to conclude that the titular dog was some kind of hellhound, and that the line, “Eyes that shine burning red, dreams of you all through my head,” had something to do with Satan.

The sounds at the beginning are Jimmy Page warming up his guitar. He called it “Waking up the army of guitars.”

Even by Led Zeppelin standards, this is a very complex song musically, with a chaotic blend of riffs and time signatures that make it very difficult to play and a testament to the band’s musicianship. When the drums and guitar kick in, they’re actually playing completely different patterns, which is something devised by John Paul Jones. The only real consistent element in the song are the vocal interludes. This is not a song you’d want to dance to.

The songwriting credits on this one read: John Paul Jones/Jimmy Page/Robert Plant. Some bands – like U2 and R.E.M. – would credit every member on their original songs, but Zeppelin decided amongst themselves who would get the credits (and associated royalties). Page and Plant were almost always listed (Plant handled lyrics), but whether Jones or Bonham showed up as a writer depended on their contributions. This track was one where Jones clearly deserved a credit; he is also listed on the album as a co-writer of “Rock And Roll,” “Misty Mountain Hop” and “When The Levee Breaks.”

Robert Plant’s vocal was recorded in just two takes, marking one of his most memorable performances. His vocal booth was the drawing room at the Headley Grange mansion, which engineer Andy Johns set up with egg crates covering the walls as a sound-soak.

The guitars are heavily layered. Four separate Jimmy Page guitar tracks were overdubbed. Page recorded the guitar directly into a 1176 limiter preamp (manufactured by Universal Audio), distorted the stages of it, and then sent that to a normally operating limiter. In other words, no guitar amplifier was used in the recording process.

Plant sampled this on his solo hit “Tall Cool One.”

“Whole Lotta Love” made #4 on the US Hot 100, and “Black Dog” was their next highest-charting song. Most of their tracks were not released as singles, and fans of the band were far more likely buy the albums.

As Robert Plant sings every line after the music stops, you can faintly hear Bonham tapping his drumsticks together to keep the time.

This was one of the few songs for which John Paul Jones used a pick to play his bass.

Robert Plant would sometimes improvise some of the lyrics in concert, substituting lines like, “I’ve got a girl that loves me so love me so sweet jelly roll.” >>

This isn’t the first famous rock song with a color-animal title that doesn’t appear in the lyric: Jefferson Airplane released “White Rabbit” in 1967. In 1977, Steely Dan gave us “Black Cow,” but that one does have the title in the lyric.

Apparently, Fergie from the Black Eyed Peas can knock out a killer version of this song. Slash from Guns N’ Roses told NME, March 22, 2010: “I first heard Fergie three years ago at a fundraiser in LA, where I was one of many guests with the Black-Eyed Peas. I was going to play during a rock medley, and in walks this little blonde girl from Orange County, and she sang ‘Black Dog‚’ better than any guy I’d ever heard.”

Note the lyrics, “Baby, when you walk that way, watch your honey drip, can’t keep away.” In 1981, Robert Plant and Jimmy Page formed a group called The Honeydrippers, which scored a hit with a remake of “Sea of Love.”

Page and Plant performed an updated version of this song on their 1995 No Quarter tour. Starting in 2005, Plant added it to his setlist at solo performances. His solo renditions were more subdued vocally, but often rather intricate musically, with a range of world music elements incorporated into the song.

Led Zeppelin cover band Dread Zeppelin did a version of this mixed with Elvis’ “Hound Dog” called “You Ain’t Nuthin’ But A Black Dog.” Their lead singer is an Elvis impersonator.

In 2015, this was used in a commercial for the video game Destiny: The Taken King. Game action takes place as the song plays in the background.

Johns explained how “Black Dog” was recorded: “This one is interesting, because we trebled the guitars. On the stereo, there is one on the left, one on the right, and one in the middle. Each was recorded live. I wanted to try live recording, because I loved the sound that Bill Halverson had secured using this technique with Neil Young. Halverson had told me how he had done that, but I never achieved his results. One day, we were hanging around in the studio, and I told Page that I wanted to try something. For some reason, it worked. The guitars were very reliable.”

I gotta roll I can’t stand still
Got a flamin’ heart can’t get my fill
With eyes that shine, burnin’ red
Dreams of you all through my head

Didn’t take too long ‘fore I found out
What people mean by down and out
Spent my money, took my car
Started tellin’ her friends she gon’ be a star
I don’t know but I been told
A big legged woman ain’t got no soul

All I ask for all I pray
Steady rollin’ woman gon’ come my way
Need a woman gonna hold my hand
Won’t tell me no lies, make me a happy man