I remember watching this great 1933 movie when I was 10 and loving every minute of it. I loved monster movies and this was a classic one. I was more of a Godzilla guy but King Kong was great.

I always wondered where the model was…well there were four of them. Two survive today. Eugene Hilchey saved one model from the studio, Hilchey entrusted the model to Bison Archives/Productions who brought it to Christie’s where is sold for $200,000 in 2009. The other one is the story below.

Special effects man Willis O’Brien and sculptor Marcel Delgado created two 18-inch-high full-body miniatures of the giant ape. They began by making durable metal armatures, which were covered with sponge rubber for the ape’s muscle structure, and rabbit fur for his hair. They also made one jointed 24-inch model of the same materials for the New York scenes and a small model of lead and fur for the climactic plummeting-down-the-Empire-State-Building shot.

Two of the Kong figures were later cannibalized for parts in other creations. The other armature survived because it was used again in “Son of Kong” (1933), which went into production soon after the first film was released.

The model stayed at RKO until 1962. Animator Phil Kellison rescued the Kong model from the studio. After discovering that the remaining rubber skin was beginning to eat away at the figure’s metal hardware, he had Kong steam-cleaned to its present state – the original bare metal skeleton. Film historian and collector Bob Burns, a friend of Kellison, said that when the person was told what he was cleaning, he began exclaiming “I’m killing King Kong! I’m killing King Kong!” 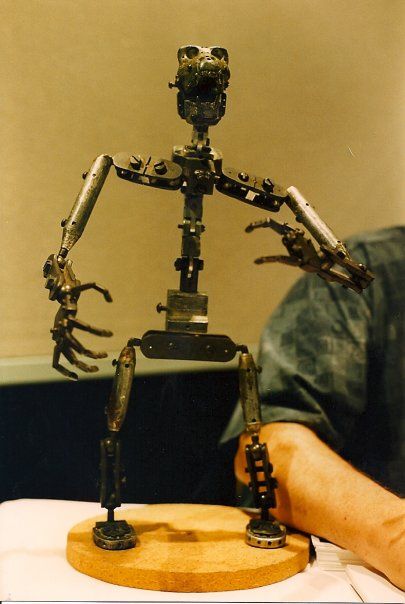 In 1975, Bob found himself at the place where the artifacts from movies were stored. To Bob’s surprise, he spotted the King Kong armature in a corner, and immediately contacted Phil. After Kellison picked up the prop, Bob was surprised yet again when Phil gave him the armature for his collection – where it resides to this day.

The Smithsonian Institute has tried to borrow or purchase the skeleton from Bob. Fearful of it being lost again, he has refused.

In October of 2005, when director Peter Jackson was finishing his remake of “King Kong,” he flew Bob Burns, his wife Kathy, and the King Kong skeleton to the location in New Zealand. They spent a week as guests of the production, showing off the historic armature to the crew. The animators even filmed the model for reference (animating it probably for the first time since its use in the “Kong” sequel in 1933). And Bob and Kathy were given cameos in the film, screaming at Kong during the film’s climax.

Another model from the film

7 thoughts on “Where is… the original King Kong model now?”