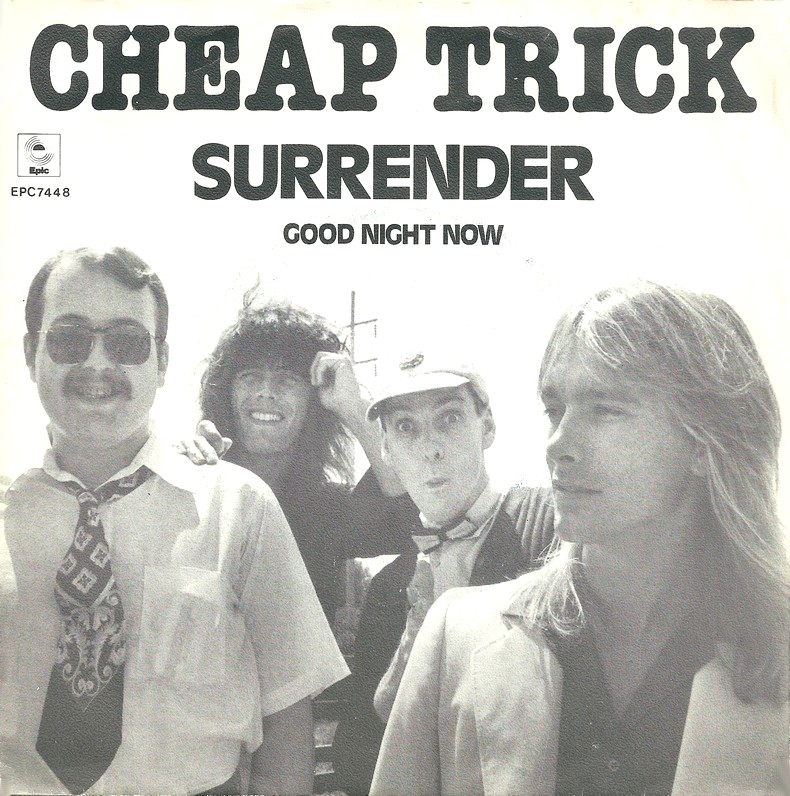 Cheap Trick is such a fun band and was/is one of the hardest working bands in rock. This song was originally on their album Heaven Tonight that peaked at #48 in the Billboard Album Charts and Surrender peaked only at #62 in the Billboard 100. The version of the song that is probably best known is the live version on their breakthrough live album Cheap Trick At Budokan in 1979.

Guitar player and writer Rick Nielsen said: “I used to hear my friends saying they thought their parents were strange. The first thing I got was the opening of the chorus: ‘Mommy’s all right, daddy’s all right.’ It just rolled off at one sitting. Those opening lines, ‘Mother told me, yes, she told me I ‘d meet girls like you.’ that ‘s advice to the lovelorn, and obviously inspired by the old Shirelles hit ‘Mama said that there’d be days like this.’ It ‘s a good way to start a song if you can make it go with a chord progression.”

Though it was not a big chart hit, this teen anthem is one of Cheap Trick’s best-known songs. The singer thinks of his parents as a bit overprotective and kind of weird, but he gains a new respect for them at the end of the song when he wakes up and they are rolling around on the couch listening to his KISS records. Cheap Trick guitarist-songwriter Rick Nielsen recalls in Rolling Stone’s Top 500 songs magazine that when he wrote it, he had to “go back and put me in the head of a 14-year-old.”

This song is featured in a number of films. In Fast Times At Ridgemont High (1983) the ticket hustler Mike Damone sings “Surrender” to help try to persuade a girl to buy tickets to a Cheap Trick concert. Band members Rick Nielsen and Robin Zander appear in the film Daddy Day Care (2003), which also features this song.

In 2017, it was used in the closing credits of the film Guardians of the Galaxy Vol. 2 and included on the soundtrack; director James Gunn used the Cheap Trick song “If You Want My Love” in his 2011 independent film Super.

This appears on Cheap Trick’s live album At Budokan. Robin Zander’s speech, which opens the live version is sampled on the Beastie Boy’s 1992 single “Jimmy James.”

In a Blender magazine interview, Cheap Trick ‘s drummer Bun E. Carlos recalls, “We had that track back in 1975. We used to rehearse in the basement of Rick [Nielsen]’s dad’s music shop on Seventh Avenue in Rockford, Illinois. As soon as I heard it, I thought it was a really interesting lyric.”

This song contains one of the more famous key changes in rock. According to Rick Nielsen, the song begins in B flat, goes to B for two verses, then changes key to C around 2:15 as Robin Zander sings, “Whatever happened to all this season’s losers of the year…”

The live version of this song from the Budokan concert was used on the Detroit Rock City soundtrack. The movie was about some kids going to a KISS concert.

The lyrics about the mother being in the WAC’s is a reference to the Women’s Army Corps, which was active during World War II. And if you’re wondering why those lyrics, “Now I had heard the WACs recruited old maids for the war,” don’t make much sense, it’s because they weren’t written that way. The original lyrics were deemed too racy: “Now I had heard the WACs were either old maids or whores.”

The high-pitched sound in the mix was made using an arpeggiator on the keyboard. When the band recorded their next album, Dream Police, they used a real string section since they had a bigger budget. This is best heard on the title track.

Cheap Trick’s version of “In The Street,” originally recorded by Big Star, was used as the theme song of That ’70s Show. In this version, they incorporate the “We’re all alright” chant from “Surrender.”

In concert, this is the song where Rick Nielsen would break out his famous 5-necked guitar. Nielsen owns hundreds of guitars, many with outrageous designs built by the Hamer Guitar company.

The studio version on Heaven Tonight

Mother told me, yes, she told me I’d meet girls like you
She also told me, “Stay away, you’ll never know what you’ll catch”
Just the other day I heard a soldier falling off
Some Indonesian junk that’s going round

Father says, “Your mother’s right, she’s really up on things
Before we married, mommy served in the Wacs in the Philippines”
Now, I had heard the Wacs recruited old maids for the war
But mommy isn’t one of those, I’ve known her all these years

Whatever happened to all this season’s losers of the year?
Every time I got to thinking, where’d they disappear?
When I woke up, mom and dad were rolling on the couch
Rolling numbers, rock and rolling, got my kiss records out