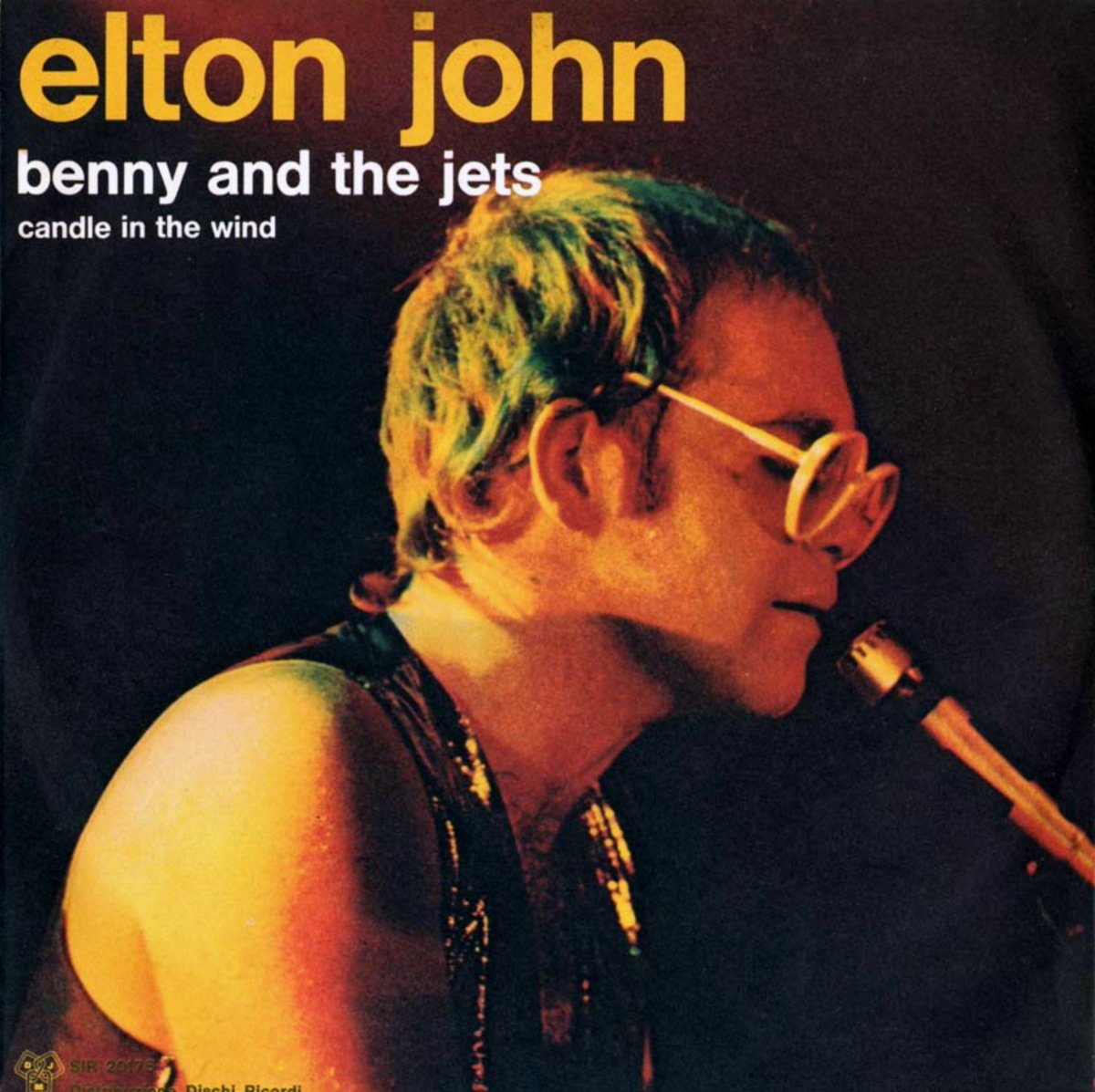 Trying to figure out Elton’s lyrics has always been interesting…not what they mean…I won’t even try that. No, it’s,,, what is he singing?  “he’s got electric boots a mohair suit You know I read it in a magazine, oh” I wasn’t even close. I thought “masseuse” was in there. I don’t think I can even spell what I’ve been singing along with for years. Mick Jagger does this well also.

Regardless of the hard to decipher words…I love the song.

Elton wrote the music to this song as an homage to glam rock, a style  that was popular in the early ’70s, especially in the UK…and of course Bernie Taupin co-wrote it with Elton.

Elton’s producer Gus Dudgeon wanted a live feel on this recording, so he mixed in crowd noise from a show Elton played in 1972 at Royal Festival Hall. He also included a series of whistles from a live concert in Vancouver B.C., and added handclaps and various shouts.

I do remember seeing  Elton perform this song when he appeared on The Muppet Show in 1977, with a group of Muppets singing along with him at the piano.

“Bennie” is a female character who Elton has described as a “sci-fi rock goddess.” Bernie Taupin, who wrote the lyrics, told Esquire, “‘Bennie And The Jets’ was almost Orwellian – it was supposed to be futuristic. They were supposed to be a prototypical female rock ‘n’ roll band out of science fiction. Automatons.”

It was Elton’s idea to stutter the vocal: “B-B-B-Bennie…” Bernie Taupin thought this worked very well with the futuristic, robotic theme of his lyrics. Said Taupin: “That’s a little quirk of the song which I’m sad to say I had nothing to do with. That and that wonderful big chord at the beginning. I think those two things are what probably made that song so popular. Neither of which I had anything to do with.”

Comic books, movies, and the German photographer Helmut Newton were some of the influences Bernie Taupin threw into the pot when writing the lyrics to this song. Said Taupin: “I’d always had this wacky science fiction idea about a futuristic rock and roll band of androids fronted by some androgynous kind of Helmut Newton style beauty, which was depicted to little great effect on the Yellow Brick Road album cover. I’m not sure if it came to me in a dream or was some way the subconscious of effect of watching Kubrick on drugs. Either way, it was definitely something that was totally formed as a concept, and something that could have morphed into any number of populist items. Could have been comic books or movies. In fact, I can’t help but believe that that Robert Palmer video with all the identical models somehow paid a little lip service to The Jets.”

The falsetto vocal is Elton trying to sound like Frankie Valli. He was a fan of Frankie Valli And The Four Seasons growing up, and went to at least one of their concerts when he was young.

Elton tried to record the Goodbye Yellow Brick Road album in Jamaica, since The Rolling Stones had just recorded their Goats Head Soup album in a studio there and encouraged him to try it. Instead of the relaxing tropical paradise they expected, Elton and his crew encountered hostile locals and faulty equipment. They ended up recording the album at the studio in France (The Chateau) where they recorded their two previous albums.

Bernie Taupin says that when he saw the Robert Palmer video for “Addicted To Love,” it portrayed when he envisioned Bennie And The Jets looking like: a dapper frontman backed by robotic models.

Elton performed this on Soul Train, becoming the first white superstar to appear on the show (he was the third white performer overall, following Dennis Coffey and Gino Vannelli). His episode aired May 17, 1975, beating David Bowie by six months. Elton asked to appear on the show, as he was a big fan. He explained on the program that he and his band would often watch it while they were on tour.

Miguel covered this as part of the 40th edition expanded reissue of Goodbye Yellow Brick Road in 2014, with Wale contributing vocals. Elton John had Peter Asher produce the nine cover versions, which also included Ed Sheeran’s take on “Candle In The Wind” and Fall Out Boy’s “Saturday Night’s Alright (For Fighting).” Asher, who produced the most successful albums by James Taylor and Linda Ronstadt, put the track together based on the sound of Miguel’s album Kaleidoscope Dream. Getting Miguel in the studio to record it proved challenging though.

In a Songfacts interview with Asher, he explained: “There was a period when I was hardly in touch with Miguel. I ended up meeting with him backstage at an Alicia Keys concert he was opening, and I said, ‘Did you ever get a chance to listen to the demo I sent you?’ He said, ‘No, I’m sorry, I don’t know what happened to it.’

So, we sat backstage and listened to it for the first time. He plugged in his in-ear monitors into my laptop and I played it to him and he said, ‘I love it. That’s great. Go ahead.’ And he just arranged time to come into the studio and sing it.

And then, he made some suggestions and changed some stuff and added some brilliant background parts and so on. So, it ended up being a combination of the ideas I’d started with, with some ideas he had on top.”

Benny and the Jets

She’s got electric boots a mohair suit
You know I read it in a magazine, oh
B-B-B-Bennie and the Jets

Hey kids, shake it loose together
The spotlight’s hitting something that’s been known to change the weather
We’ll kill the fatted calf tonight
So stick around
You’re gonna hear electric music solid walls of sound

Hey kids, plug into the faithless
Maybe they’re blinded
But Bennie makes them ageless
We shall survive, let us take ourselves along
Where we fight our parents out in the streets
To find who’s right and who’s wrong

Say, Candy and Ronnie, have you seen them yet?
Oh, but they’re so spaced out
B-B-B-Bennie and the Jets
Oh but they’re weird and they’re wonderful
Oh Bennie, she’s really keen

31 thoughts on “Elton John – Benny and the Jets”