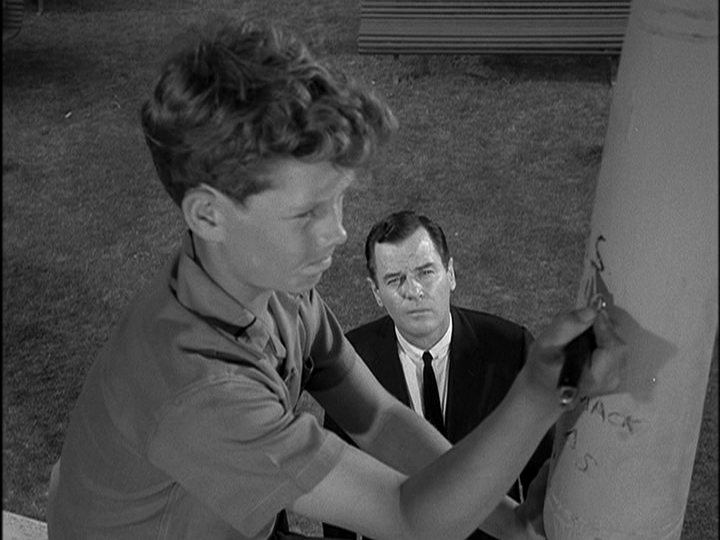 The Twilight Zone is a show that I can watch at any time. Different people have tried to remake the show but it never works like the original. Picking one classic show is impossible but this is one of my favorites. Gig Young plays Martin Sloan who does a great job in this episode. Many people try to go back home but it’s never the same because of progress and change…Martin Sloan DOES go home and everything is the same…he even sees himself as a boy…and meets his parents…again.

I guess because we only get one chance. Maybe there’s only one summer to every customer. That little boy, the one I know – the one who belongs here – this is *his* summer, just as it was yours once. Don’t make him share it.

Martin, is it so bad where you’re from?

You have to leave here. There’s no room, there’s no place. Do you understand that?

Martin Sloan, a successful 36-year-old advertising executive, stops at a gas station. He’s very stressed out and behaves like a stereotypical rude New Yorker. In the distance, he sees the town he grew up in, Homewood. Curious about his childhood, Martin leaves his sports car for an oil change and walks about a mile and a half to get a closer look. His first stop is an old ice cream shop. Martin is surprised to see that the attendant and the prices are the same as he remembered.

Walking down the street, he sees a young child (the four-year-old Ron Howard), who turns out to be his old neighbor. Martin then sees an 11-year-old boy carving the name “Martin Sloan” into a gazebo, and he recognizes himself. The child flees, thinking the adult wants to punish him. Martin then goes to his house, and his parents answer the door. He finally realizes that he’s back in 1934. His parents don’t believe him when he says he’s their grown-up son, and he tries to prove it by showing them his wallet.

Desperately wanting to tell the 11-year-old that he should treasure this time in his life, Martin finds his younger self riding on a merry-go-round. The child, still thinking the adult is angry with him, runs and falls, and the two are injured simultaneously. Later, Martin’s father, who has examined the wallet and now understands the truth, finds Martin sitting alone by the carousel. The two have a sad, beautiful conversation about life, and the father gives his son the advice he really needed when the story began. Martin begrudgingly accepts that he must return to the present. On his way out of town, he stops into the soda shop, which is now “modern”… Seemingly at peace with himself, he gives the gas station mechanic a tip and drives away.