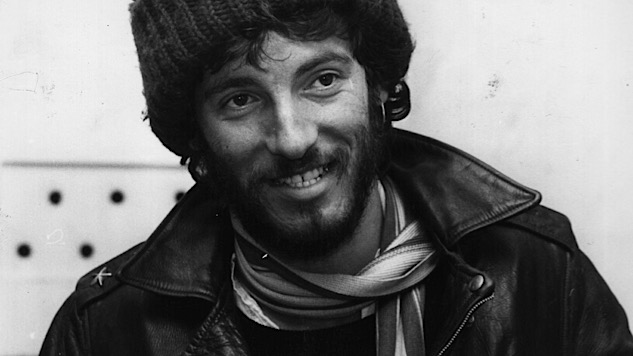 I had skin like leather and the diamond-hard look of a cobra, I was born blue and weathered but I burst just like a supernova, I could walk like Brando right into the sun, then dance just like a Casanova…

What an opening that is…nothing like early Springsteen. This song was on his debut album and still one of my favorite Springsteen albums, Greetings From Ashbury Park. This was the first song Springsteen played for John Hammond (who signed Bob Dylan and Springsteen) at his audition for Columbia Records in 1972. What was to be a short meeting turned into a 2-hour audition and earned him a record deal and this album was made.

The song has a stream of conscious feel to it. The album was critically praised but did not have huge sales.

In this song, Springsteen plays the dangerous romantic trying to navigate New York City. This being the ’70s, the city is filled with pimps, gamblers and tough guys, and Springsteen’s character is trying to find his place.

As the album title suggests, Springsteen is very much a New Jersey guy, but he spent a lot of time in New York City when he was getting started, taking lots of road trips to perform and record (the album was actually done in Blauvelt, New York, about 25 miles north of Manhattan). With his observer view of New York City, he was able to craft different stories around the setting, which kept him from becoming a character in his own songs. Another track on the album, “Does This Bus Stop At 82nd Street?,” is also set in the City.

David Bowie recorded this in 1974, but his version was never released. It can be found on his 1989 rarities box set Sound + Vision. Bowie also recorded another track on the album, “Growin’ Up,” around this time, but that one also got shelved.

This was one of the songs that convinced Springsteen’s first manager, Mike Appel, that he was going to be a star. The contract Springsteen signed with Appel would come back to haunt him, as a legal dispute kept Bruce from releasing any material for three years after Born To Run in 1975.

Springsteen wrote the lyrics first and filled in the music later. The only time he wrote this way was on his first album.

It’s Hard To Be A Saint In The City

I had skin like leather and the diamond-hard look of a cobra
I was born blue and weathered but I burst just like a supernova
I could walk like Brando right into the sun, then dance just like a Casanova
With my blackjack and jacket and hair slicked sweet
Silver star studs on my duds, just like a Harley in heat
When I strut down the street, I could feel its heart beat
The sisters fell back and said, “Don’t that man look pretty”
The cripple on the corner cried out, “Nickels for your pity”
Then gasoline boys downtown sure talk gritty
It’s so hard to be a saint in the city

I was the king of the alley, Mama, I could talk some trash
I was the prince of the paupers, crowned downtown at the beggar’s bash
I was the pimp’s main prophet, I kept everything cool
Just a backstreet gambler with the luck to lose
And when the heat came down it was left on the ground
The devil appeared like Jesus through the steam in the street
Showin’ me a hand I knew even the cops couldn’t beat
I felt his hot breath on my neck as I dove into the heat
It’s so hard to be a saint when you’re just a boy out on the street

And the sages of the subway sit just like the living dead
As the tracks clack out the rhythm, their eyes fixed straight ahead
They ride the line of balance and hold on by just a thread
But it’s too hot in these tunnels, you can get hit up by the heat
You get up to get out at your next stop, but they push you back in your seat
Your heart starts beatin’ faster as you struggle to your feet
Then you’re outa that hole and back up on the street

And then South Side sisters sure look pretty
The cripple on the corner cries out, “Nickels for your pity”
And then downtown boys, they sure talk gritty
It’s so hard to be a saint in the city