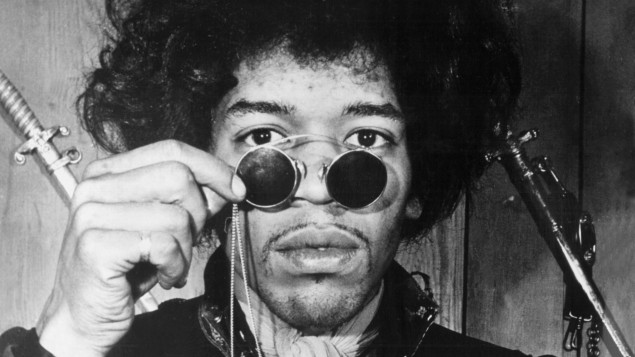 I’ve always liked Jimi’s more mellow songs. The song moves so well because of his guitar playing and the futility of life lyrics. The song originally appeared on the Axis: Bold as Love album in 1968. It was not released as a single and did not chart although the album peaked at #3 in the Billboard 200.

Hendrix’s brother, Leon Hendrix, has commented that the lyrics allude to their father’s alcoholism, Leon being taken away so suddenly by Child Protective Services without announcement, and the abusive relationship between their parents (or from stories told by their grandmother, who was half-Cherokee.

This is one of Hendrix’ most autobiographical and personal songs. He hated talking about his past, and avoided it during press conferences and interviews.

Hendrix’ mother was a Cherokee Indian, and in this song, he identifies with his heritage as a Native American.

Hendrix read the words for this song as a poem instead of singing them.

Castles Made Of Sand

Down the street you can hear her scream you’re a disgrace
As she slams the door in his drunken face
And now he stands outside
And all the neighbours start to gossip and drool
He cries oh, girl you must be mad,
What happened to the sweet love you and me had?
Against the door he leans and starts a scene,
And his tears fall and burn the garden green

And so castles made of sand fall in the sea, eventually

A little Indian brave who before he was ten,
Played war games in the woods with his Indian friends
And he built up a dream that when he grew up
He would be a fearless warrior Indian chief
Many moons passed and more the dream grew strong until
Tomorrow he would sing his first war song and fight his first battle
But something went wrong, surprise attack killed him in his sleep that night

And so castles made of sand melts into the sea, eventually

There was a young girl, whose heart was a frown
‘Cause she was crippled for life,
And she couldn’t speak a sound
And she wished and prayed she could stop living,
So she decided to die
She drew her wheelchair to the edge of the shore
And to her legs she smiled you won’t hurt me no more
But then a sight she’d never seen made her jump and say
Look a golden winged ship is passing my way

And it really didn’t have to stop, it just kept on going…

And so castles made of sand slips into the sea, eventually

9 thoughts on “Jimi Hendrix – Castles Made Of Sand”