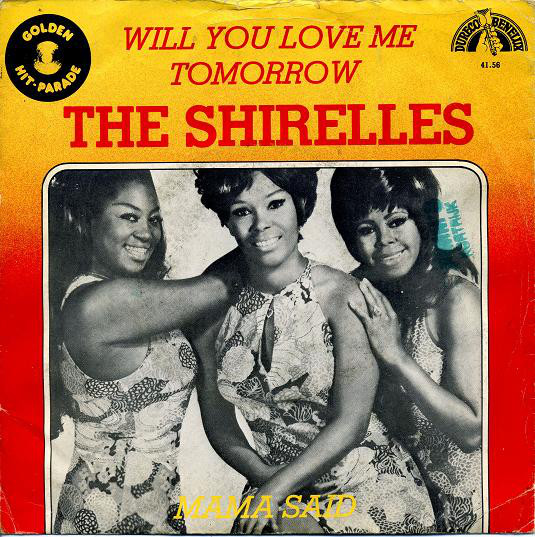 Great song that was highly influential at the time. It’s one of the many great songs written by Goffin and King. The song peaked at #1 in 1961. The B-side of the single was “Boys,” which was later covered by the Beatles with a Ringo Starr vocal. The song sold over a million copies.

This was written by the husband and wife songwriting team of Gerry Goffin and Carole King. It’s a benignly sexual song with the singer wondering what will happen the day after an encounter with her man. It met with some resistance from radio stations, but not enough to stop it from becoming a huge hit, selling over a million copies.

Goffin and King were a husband and wife songwriting team who worked were signed to Don Kirshner’s Aldon music, which along with the Brill building, was the center of the songwriting universe in the early ’60s. Kirshner assigned them to write a song for the Shirelles as a follow-up song to “Tonight’s The Night.” King came up with the music, and Goffin, excited about writing for The Shirelles, quickly came up with the lyrics. Kirshner loved the song, and recognizing that he had something new and different, decided to use it to get in the door at Columbia Records, so he offered it to Columbia for Johnny Mathis, but their label head Mitch Miller politely declined, which Kirshner later said was “The best thing he ever did for me.”

Back at Aldon Music, Tony Orlando wanted to record the song, but Kirshner, taking a cue from what he learned when he offered it to Mathis, explained that it was a girl’s lyric, and that no teenage boy would say these words. So finally, the song went to The Shirelles, where it was intended all along. Orlando did record an answer song called “Not Just Tomorrow But Always” using the name Bertell Dache.

Don’t let anyone tell you that this was the first US #1 hit by an all-female group – The McGuire Sisters hit the top spot three times in the ’50s. “Will You Love Me Tomorrow” was, however, the first #1 by a black female group, and the first #1 on the Billboard Hot 100 chart, which debuted in 1958. From 1955-1958, Billboard had a chart called the Top 100 with different criteria.

Shirelles lead singer Shirley Alston initially disliked the song, dismissing it as “too Country and Western” for the 4-girl group from Passaic, New Jersey. Their producer Luther Dixon convinced her they could do it in their style, and asked King and Goffin if they could add strings and turned it into an uptempo song, which they did.

Carole King included this on her 1971 album Tapestry. Lou Adler, who produced the album and owned King’s record company, explained: “The only thing we reached back for, which was calculated in a way, which of the old Goffin and King songs that was hit should we put on this album? And, that’s how we came up with ‘Will You Still Love Me Tomorrow.’ I thought that song fit what the other songs were saying in Tapestry. A very personal lyric.”

A 1968 version by the Four Seasons hit #24 and was that group’s last Top 40 hit of the ’60s – they didn’t have another for seven years. Dave Mason brought it back to the charts in 1978, hitting #39. Some of the other artists to record this song include Cher, Laura Nyro, Roberta Flack, Millie Jackson, Bryan Ferry and Neil Diamond.

First pressings of the single (Scepter 1211) show the title as simply “Tomorrow.”

Amy Winehouse recorded a cover for the Bridget Jones: The Age of Reason soundtrack in 2004, slowing down the tempo and using a jazz arrangement. Her version debuted at #62 on the UK singles chart in the week after her death.

Goffin and King were proud of their breakthrough hit and had their New Jersey home’s doorbell “pretentiously and expensively” modified to play it. “The ring is out of rhythm, with all the notes incorrectly timed as quarter notes: do do mi mi re re re do,” King recalled in her memoir, A Natural Woman.

Will You Still Love Me Tomorrow

Tonight you’re mine, completely
You give your love so sweetly
Tonight the light of love is in your eyes
But will you love me tomorrow

5 thoughts on “The Shirelles – Will You Still Love Me Tomorrow”

Leave a Reply to The Hinoeuma Cancel reply