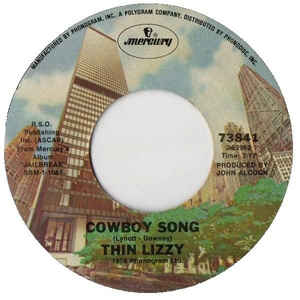 I always liked Phil Lynott’s writing and singing. This song starts off slow and then really kicks in. It peaked at #77 in the Billboard 100 in 1976. They had bigger hits such as The Boys are Back in Town and Jailbreak but this song is really good.

“Cowboy Song” is described by Phil Lynott biographer Mark Putterford as “a cross between Clint Eastwood and Rudolph Valentino, with a bit of George Best thrown in for good measure. Philip strode into the sunset of his own imagination and always, of course, lived to fight another day.”
It was also, he says, “one of Lizzy’s most effortlessly seductive rockers to date”.

Though the song is strong lyrically, bass player and writer Lynott was never afraid to allow the axemen to dominate a track, and it features some typically blistering Lizzy soloing. “Cowboy Song” was released on the Mercury label in 1976 backed by “Angel From The Coast”

I was took in Texas, I did not know her name.
But Lord all these southern girls, they seem the same.
But down below the border, in a town in Mexico,
I got my job busting broncs for the rodeo.

Roll me over ans turn me around, let me keep spinnin till I hit the ground.
Roll me over and let me go, running free with the buffalo.

Roll me over, and I’ll turn around.
And I’ll move my fingers up and down.
Up and down.