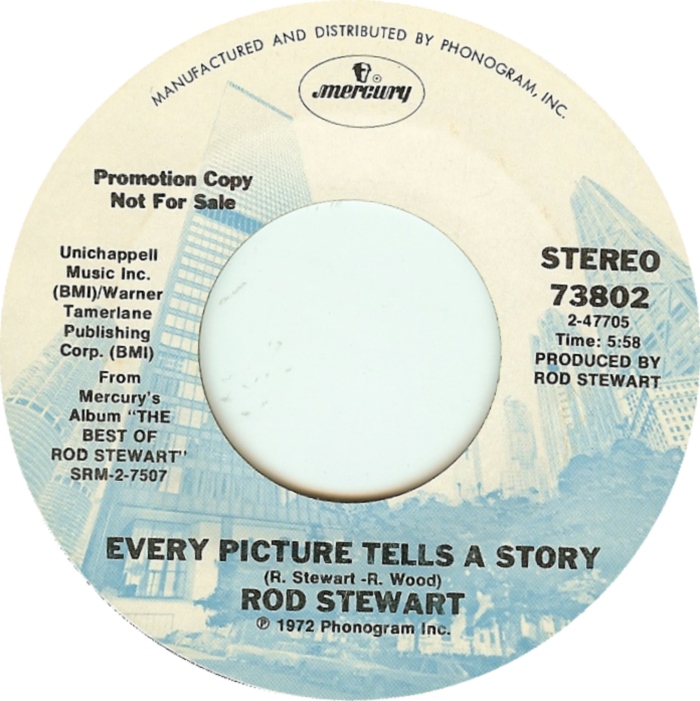 This is my favorite song of Rod Stewart. It’s an acoustic driven rocker with Rod never relenting on the lyrics. The song has a stream of conscious feel to it. Every Picture Tells a Story was written by Stewart and Ron Wood. From Songfacts. This song recounts a series of misadventures endured by Stewart’s globetrotting protagonist, culminating with his torrid romance with a “slit-eyed lady.” (Political correctness has never exactly been Rod Stewart’s calling card). In the May 1995 issue of Mojo, Stewart said of the song: “I can remember the build up. You know what the song’s about – your early teenage life when you’re leaving home and you’re exploring the world for yourself. Ronnie (Wood) and I rehearsed round my house at Muswell Hill and recorded it the next day. That whole album was done in 10 days, two weeks, about as long as it takes to get a drum sound right nowadays.” The song’s title doesn’t appear in the lyrics until the end… where it is repeated 24 times! (“Every picture tells a story, don’t it?”)  Every Picture Tells a Story Spent time feelin’ inferior standing’ in front of my mirror Combed my hair in a thousand ways, but I came out lookin’ just the same Daddy said, son, you better see the world I wouldn’t blame you if you wanted to leave But remember one thing, don’t lose your head to a woman that’ll spend your bread So I got out Paris was a place you could hide away, if you felt you didn’t fit in French police wouldn’t give me no peace, they claimed I was a nasty person Down along the left bank, minding my own Was knocked down by a human stampede Got arrested for inciting a peaceful riot, when all I wanted was a cup of tea I was accused I moved on Down in rome I wasn’t getting enough Of the things that keep a young man alive My body stunk, but I kept my funk at a time when I was right out of luck Getting desperate, indeed I was looking like a tourist attraction Oh, my dear, I better get out of here for the vatican don’t give no sanction I wasn’t ready for that, no, no I moved right out east, yeah On the peking ferry I was feeling merry, sailing on my way back here I fell in love with a slant-eyed lady by the light of an eastern moon Shanghai lil never used the pill, she claimed that it just ain’t natural She took me up on deck and bit my neck Oh, people, I was glad I found her Oh, yeah, I was glad I found here I firmly believed that I didn’t need anyone but me I sincerely thought I was so complete Look how wrong you can be The women I’ve known I wouldn’t let tie my shoe They wouldn’t give you the time of day But the slant-eyed lady knocked me off my feet God, I was glad I found her And if they had the words I could tell to you To help you on your way down the road I couldn’t quote you no dickens, shelley or keats ‘Cause it’s all been said before Make the best out of the bad, just laugh it off You didn’t have to come here anyway, so remember Every picture tells a story don’t it? Every picture tells a story don’t it? Every picture tells a story don’t it? Every picture tells a story don’t it? Every picture tells a story don’t it? Every picture tells a story don’t it?

5 thoughts on “Rod Stewart – Every Picture Tells a Story”