This song’s riff will stick with you. Once the riff is up it washes over you with a psychedelic feel. The song peaked at #12 in the Billboard 100 and #7 in the UK Charts in 1968. This was their only hit in America. The song refers to the paintings of  L. S. Lowry. 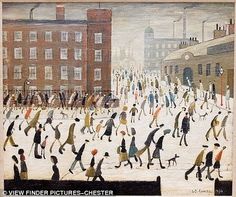 Status Quo are best known in Britain for their no-nonsense, heads-down boogie rock which they have played since the 1970s, but this psychedelic effort is their best-known hit in America, where it is a staple of oldies radio.

When the song hit the American charts, the group made the fateful decision to remain in Europe, focusing their efforts on the UK market. This paid off with wild success in their homeland, as Status Quo became one of the most popular bands in Britain, charting over 60 singles. They did tour the US in the mid-’70s, but never broke the American market. Their only other chart entry there was “Ice in the Sun,” released later in 1968.

Lead singer Francis Rossi wrote three-quarters of this song on the toilet, where he’d fled to escape his wife and mother-in-law. The remainder he finished off in the lounge.