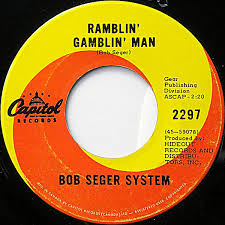 Something about Bob Seger…the man paid his dues. Bob started in 1961 in the Detroit music scene in a band called the Decibels. Bob kicked around in different bands through the years. His break out song is this one. His friend, 19-year-old Glen Frey is playing acoustic guitar and singing backup on this song. The song was a big hit in Michigan and eventually started to climb the charts. The song peaked at #17 in the Billboard 100 in 1969. It would be 1975 before Seger broke nationally.

I’ve always liked Bob Seger. He gets heavy play here in the south and many of his songs have been played to death…but not this one. I like the rawness of this single.

Seger and his band were called “The Bob Seger System” when this song was released. It was just their second single on Capitol Records (after “2+2=?”), which they joined after their previous label, Cameo-Parkway, folded.

This was Bob Seger’s first big hit; it charted at #17 despite receiving no airplay in most major cities, including New York, Los Angeles, and San Francisco. Seger was very popular in Detroit, but despite being a talented singer/songwriter at the beginning of the singer/songwriter era, he couldn’t get any heat in most coastal cities. It wasn’t until his 1975 Beautiful Loser album that Seger broke nationally.

Here is a very early look at Bob Seger

Yeah, I’m gonna
Tell my tale, come on
Come on, ha, give a listen

Yeah, yeah, yeah….
Ha ha, bring it on
Come on down, yeah
All right, here we go
Now, now