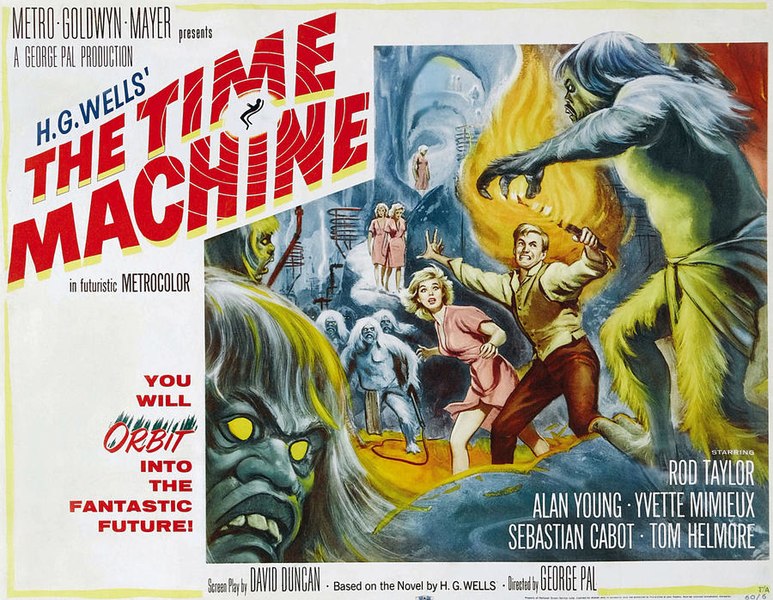 I somehow missed this movie until 2005. It stars Rod Taylor as George Wells, the beautiful Yvette Mimieux as Weena and Alan Young. I have always liked Time Travel movies and this one is well thought out.

Rod Taylor portrays George Wells and he builds a Time Machine. Other than the Tardis it’s the coolest time machine I’ve ever seen. He builds a miniature one and while his friends look on he turns the small machine on and it disappears into the future. His friends don’t really believe it. They question what good it will do if it really works?

This time machine doesn’t physically move but just occupies the same space in the future.

George gets frustrated and takes the real machine for a test ride into the future. They had no CGI but they get across time travel fine. To show time passing they set up a mannequin across the street to show different clothing styles passing by with the time which is great.

George ends up in a future society where all the people are young. They do nothing all day but play and eat. George soon finds out there is a price they pay for playing all day.

My favorite part of the movie are the creatures called the Morlocks with glowing eyes that live underground because they could not stand light. They provide the clueless land dwellers with food for obvious reasons. That is a simplified version of the film. Very well made movie.

This all begins right at the turn of the 20th century. Alan Young does a great job as David Filby…George’s best friend and later on David’s son…

My son watched this when he was 8 and was scared of the Morlocks but kept watching. He still watches it now. It was filmed in 1960 and the film won an Oscar for Best Effects, Special Effects. Does it measure up to today’s special effects? Certainly not but it gets the story across so if you like classic sci-fi you might like this one.

This is an article on the Time Machine prop that was used in the movie.

This is a trailer for the movie.